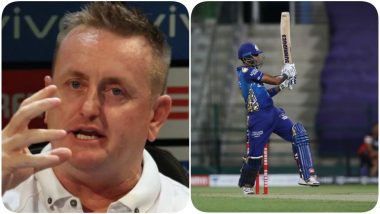 Ever since Surya’s name has been trending on social media on how the Mumbai cricketer has been ignored despite several performances. Now, former New Zealand payer Scott Styris took to social media and posted a tweet and suggest the Mumbai Indians batsman to move overseas if he wishes to play international cricket. Suryakumar Yadav Has Burning Desire to Don India Blue, Says Kieron Pollard.

The former Kiwi cricketer took to social media and wrote that if Surya wishes to play internationally then he must consider moving overseas. "I wonder if Suryakumar Yadav fancies playing International cricket he might move overseas #CoughNZCough." While many of them have speculated if the former NZ player has offered him a place in New Zealand cricket. Surya has so far scored 362 runs in IPL 2020 from 12 games. Let's have a look at the tweet by Styris.

Mumbai Indians won the game by five wickets with five balls to spare. The team continued to miss out on the services of Rohit Sharma who is currently out of the team due to an injury. The team continues to retain the number one position in the IPL 2020 with 16 points and has almost made it to the playoffs.

(The above story first appeared on LatestLY on Oct 29, 2020 12:38 PM IST. For more news and updates on politics, world, sports, entertainment and lifestyle, log on to our website latestly.com).