Swashbuckling West Indies opener Chris Gayle scored a 12-ball half century to make his presence felt in the ongoing edition of the Abu Dhabi T10 league. 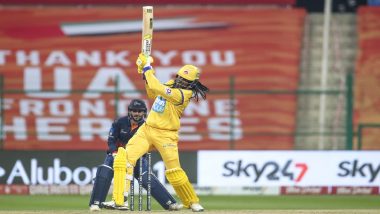 The 41-year-old played a brilliant knock of 22-ball 84, which was studded with six 4s and nine 6s, to steer Team Abu Dhabi to a nine-wicket win against Maratha Arabians on Wednesday night at the Abu Dhabi Zayed Cricket Stadium.

Chasing Arabians' moderate total of 97/4, Gayle helped his team reach the target in 5.3 overs and win the match with 27 balls to spare.

Gayle, known as the Universe Boss, dominated the attack. He was in his elements from the first over, ravaging any error in line and length from the bowlers. Incidentally, 78 runs out of his 84 came through boundaries.

"We never stop learning. Sanga, you're the man, you're a legend," Gayle lauded Sangakkara in his special message.

Before the start of the tournament, the veteran West Indies batsman had stated that he would "love" to see T10 format of cricket in the Olympics.

"I would absolutely love to see T10 within the Olympics. It would be something huge for the sport from a general point of view. I also think T10 can be (held) within the United States also since it's a big platform," said Gayle while speaking from his home in Jamaica.

"I think most people don't recognise the States for cricket, but T10 is very much suitable to be held within USA, and I believe it can help generate bigger revenues as well," he added.

(The above story first appeared on LatestLY on Feb 04, 2021 09:57 AM IST. For more news and updates on politics, world, sports, entertainment and lifestyle, log on to our website latestly.com).