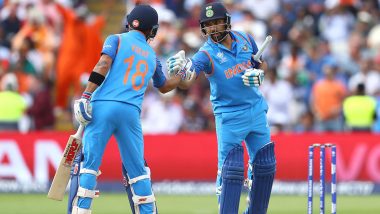 Many major cricket series and tournaments around the world might be on a halt amid the COVID-19 pandemic. However, fans can still relish some memorable matches played in the past. In this article, we’ll look back at India vs Bangladesh match in the 2017 Champions Trophy semi-final which was played on exact this day (June 15) three years ago. The Bangla Tigers left everyone shell-shocked as they piped New Zealand and Australia to make a place in the semis. In the knock-out match, however, they were not able to put a great competition against Virat Kohli’s troop. Rohit Sharma Reveals Plan After Lockdown During Q&A Session, Shares Video of Himself Smashing Sixes.

The Men in Blue won the toss and invited Bangladesh to bat first at the Edgbaston track. The batting side got off to the worse possible start as opener Soumya Sarkar was dismissed for a second-ball duck. Nevertheless, veteran pair of Tamim Iqbal (70) and Mushfiqur Rahim (61) stitched a significant partnership and made the contest even. After their dismissal, however, the middle order couldn’t contribute much. Virat Kohli Completes 10 Years in T20I Cricket, Fans Trend #10YearsofKingKohliInT20Is on Twitter.

Nevertheless, courtesy some good hitting by skipper Mashrafe Mortaza lower down the order, Bangladesh posted 264-7 in their allotted 50 overs.

In reply, Indian openers Rohit Sharma and Shikhar Dhawan got their side off to a flier. The former played steadily while the left-handed batsman went all guns blazing from the outset. Dhawan was eventually dismissed by Mortaza after scored 46 off 34 balls. However, that proved out to be Bangladesh’s last cherishable moment in the encounter.

Rohit was joined by skipper Kohli and since then, it was one-way traffic. The two played safe cricket but also scored runs at a rapid pace. No Bangladesh bowler seemed like breaching their defences for even once. The opener went to score a brilliant century while Kohli remained unbeaten at 96. Riding on their efforts, India won the game by nine wickets and advanced to their second successive Champions Trophy Final.

Unfortunately, however, India weren’t able to replicate their 2013 heroics as arch-rivals Pakistan outplayed them in all the three departments and won the final clash by 180 runs, clinching the Champions Trophy title for the first time.

(The above story first appeared on LatestLY on Jun 15, 2020 04:10 PM IST. For more news and updates on politics, world, sports, entertainment and lifestyle, log on to our website latestly.com).