This Day That Year: West Indies Defeat Australia to Lift the Inaugural World Cup Title in 1975 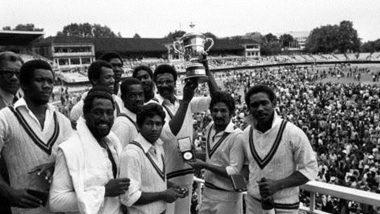 Winning the World Cup is certainly the biggest aim of many players and teams around the world. With the marquee event occurring only once in four years, aside needs to perform at it's prime in order to get the title. Well, West Indies were the first team to achieve the feat as they won the inaugural edition of the gala tournament in 1975. In fact, they lifted the prestigious trophy on exact this day (June 21). Clive and Co defeated Australia in the final encounter at the iconic Lord's Cricket Stadium and became the first team to attain the 'World Champions' title. This Day That Year: India Registered Their First ODI Victory in 1975 Cricket World Cup After Sunil Gavaskar's 65.

Back then ODIs used to be a 60-over per side affair. As many as eight teams participated in the tournament with Australia and West Indies qualifying for the final encounter. Aussie skipper Ian Chappell won the toss and invited West Indies to bat first in the all-important clash. The decision seemed to be impeccable at first as the Jeff Thomson and Dennis Lillee breathed fire with the new balls and rattled the Caribbean top order. However, skipper Clive Lloyd rose to the occasion and brought his side back in the hunt.

Lloyd went after the bowlers from the outset and smashed the Aussie bowlers for boundaries and sixes. He was well supported by Keith Boyce and Bernard Julien who made significant contribution lower down the order. However, Llyod was the stand-out performer of the match as he scored 102 off 85 deliveries and guided his side to a massive total of 291/8. Gary Gilmour was the pick of the Australian bowlers as he took five wickets.

Australia weren't going to put their guards down as they made a solid comeback while chasing the target. Opener Alan Turner made a solid start and he was also well supported by the Chappell brother (Ian and Greg). However, no Aussie batsmen could convert their start into a big score. Nevertheless, their batsmen kept scoring runs and the contest looked even till the last.

At last, however, Australia got bundled out for 274 and lost the game by 17 runs, making West Indies the inaugural World champions. Keith Boyce was the pick of the Caribbean as he took four wickets. For his blistering century, Clive Lloyd was adjudged the Player of the Match.

(The above story first appeared on LatestLY on Jun 21, 2020 04:31 PM IST. For more news and updates on politics, world, sports, entertainment and lifestyle, log on to our website latestly.com).