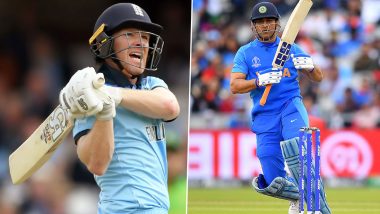 England might have lost the third and last ODI against Ireland in Southampton. However, the captain of the Three Lions Eoin Morgan has added another feather to his already prestigious hat. The southpaw, who scored his 14th ODI century in the game, surpassed former Indian skipper MS Dhoni and became the captain with most sixes in international cricket. Morgan achieved the feat by hitting his 212th six. Notably, Dhoni, who has 211 sixes as captain, achieved the feat in 332 games. While, Morgan surpassed his tally in less than half the number of matches (163). England vs Ireland 3rd ODI Stat Highlights: Paul Stirling, Andrew Balbirnie Shine.

After Morgan and Dhoni, former Australian captain Ricky Ponting is third in the list with 171 sixes while ex-New Zealand captain Brendon McCullum is placed at the fourth position with 170 massive hits.

Speaking of the England vs Ireland 3rd ODI, Eoin Morgan and Co posted 328 runs while batting first. The England captain unleashed mayhem against his former team and scored 106 runs off mere 84 balls. Other than him, Tom Banton (58) and David Willey (51) scored half-centuries while Tom Curran scored 38 crucial runs.

While chasing the massive total, Ireland got off to a flying start. Veteran opener Paul Stirling joined forces with skipper Andrew Balbirnie and the duo piled up 214 runs for the second wicket. Both registered their respective centuries as Ireland’s historic win looked inevitable. However, some drama occurred after their dismissal. Tom Curran showcased some brilliant death bowling in the end overs and the brought his side back in the hunt. However, Harry Tector (29) and Kevin O’Brien (21) helped their side cross the line with one ball to spare.

(The above story first appeared on LatestLY on Aug 05, 2020 03:42 PM IST. For more news and updates on politics, world, sports, entertainment and lifestyle, log on to our website latestly.com).