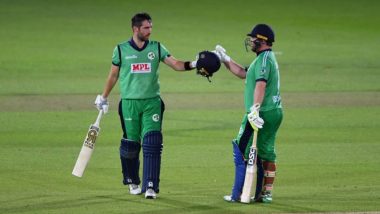 Ireland defeated England in the third and last One-Day International (ODI) at the Ageas Bowl in Southampton. Set a target of 329 runs to win, the visitors completed it with one ball and seven wickets to spare. Opener Paul Stirling and captain Andrew Balbirnie scored centuries each as Ireland registered a record win. However, it is England who take the three-match series 2-1. Stirling scored super 142 while Balbirnie notched 113. Towards the end, unbeaten 50-run stand off 34 balls between Harry Tector and Kevin O Brien helped Ireland win by seven wickets. England vs Ireland 3rd ODI 2020 Highlights.

Responding to England 328, Ireland openers Stirling and Gareth Delany added 50 runs for the first wicket. Stirling and Balbirnie then added a massive 214-run stand for the second wicket to take Ireland close to the target.

Both Stirling and Balbirnie the fell in the space of three overs and looked like England will bounce back. However, Tector and Brien helped England cross the line. Meanwhile, let’s have a look at some stats from the match.

# It is also the highest successful chase for any team against England in England.

# This is the second time Ireland have successfully chased over 300 against England.

# 142 by Paul Stirling is now the highest score by Ireland batsman against England.

# The 214-run stand between Stirling and Balbirnie is now the highest second-wicket partnership at Rose Bowl.

# This is only the fifth instance of both captains scoring a century in the same match.

# Morgan now holds the record of hitting most sixes as a captain in international cricket, going past MS Dhoni’s tally of 211 sixes.

Earlier, batting first, England recovered well to post 328 on board after losing top order cheaply. Morgan smashed 106 off just 84 balls as he and Tom Banton (58) added 146 runs for the fourth wicket. Towards the end, David Willey scored valuable 51 off 42 balls to guide England to a good total.

(The above story first appeared on LatestLY on Aug 05, 2020 02:55 AM IST. For more news and updates on politics, world, sports, entertainment and lifestyle, log on to our website latestly.com).