It was for an incident in this series that Mankad is best remembered for in many cricketing circles. He ran-out non-striker Bill Brown for backing up too far away from the crease. Mankad had already warned Brown once but the latter didn’t oblige and kept moving away from his crease even before the delivery was bowled. 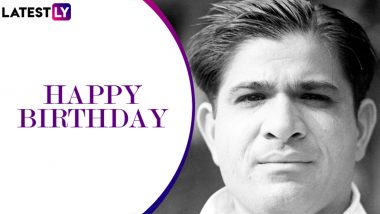 Former Indian all-rounder Vinoo Mankad was born on this day in 1917. Mankad was an opening batsman and a left-arm orthodox spinner by trade. He made his international debut for India in 1946 and went on to represent the country in 44 Test matches, starting with the 1946 Test series with England. Born in the princely state of Jamnagar, home to Ranjitsinhji and Duleepsinhji, Mankad impressed the national selectors with his performances in the Ranji Trophy. His 185 against Bengal in the final earned him praises from wide across the country. He was also selected to play four matches against England as part of the World Xi and topped both the batting and bowling averages. On his 103rd birth anniversary, take a look at some lesser-known facts about Vinoo Mankad. When Ajay Jadeja Plundered Pakistan Bowlers for Boundaries and Laid Cornerstone for India’s Memorable 1996 World Cup Quarter-Final Win (Watch Video).

Mankad was primed to be one of India’s great but lost his best years of cricket to the World War II before eventually making his international debut in 146-47 when India toured England. India were thrashed in the entire tour but Mankad emerged as one of the greatest all-rounders of his generation with a total haul of 129 wickets and 1120 runs. India next toured Australia and like most of his teammates, Mankad struggled to assert his dominance on the Australians, who would very soon immerse on a journey to invincibles led by the legendary Don Bradman.

But it was for an incident in this series that Mankad is best remembered for in many cricketing circles. He ran-out non-striker Bill Brown for backing up too far away from the crease. Mankad had already warned Brown once but the latter didn’t oblige and kept moving away from his crease even before the delivery was bowled.

During one of his delivery, Mankad stopped mid-way through his bowling and dislodged the bails to dismiss Brown. He was subject to heavy criticism for his actions and reports also emerged that he had done the same a Brown during a tour match. The Indian all-rounder received enormous support from opposition caption Bradman but many felt that although it wasn’t against the rules, it as a sign of lack of sportsmanship. Take a look at some interesting facts.

But Mankad did well to put all aside and help India to their first-ever win against England in a Test match at home. Then when India toured England in June 1952, Mankad proves even better. He wasn’t part of the team initially and was instead playing club cricket in England but following a thrashing defeat in the first Test, India called him up to the team for the Test match at Lord’s.

Mankad scored 72 in the first innings at Lord’s and followed it up with a five-wicket haul. Then in the second innings he went even better and scored a hundred becoming just the second non-England cricketer to have his name in both the batting and bowling charts at the honours board at Lord’s cricket ground after Keith Miller. Sir Garfield Sobers later went on to become the third cricketer to achieve the feat.

(The above story first appeared on LatestLY on Apr 12, 2020 08:30 AM IST. For more news and updates on politics, world, sports, entertainment and lifestyle, log on to our website latestly.com).