The Royal Challengers Bangalore (RCB) skipper, who is currently plying his trade in the Indian Premier League 2018 (IPL 2018), posted a couple of pictures of him posing next to the car. 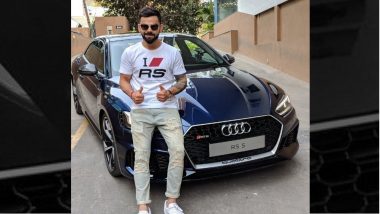 Indian cricket team captain Virat Kohli on Wednesday took to Twitter to announce the launch of second-generation Audi RS 5 Coupe in India. Kohli happened to be the brand ambassador of Audi in India. The luxury car is priced at Rs 1.1 crore. The Royal Challengers Bangalore (RCB) skipper, who is currently plying his trade in the Indian Premier League 2018 (IPL 2018), posted a couple of pictures of him posing next to the car. “Bringing motosport to a road near you, this masterpiece of a machine; The Audi RS 5 Coupe, (sic)” tweeted Kohli along with pictures.

The Audi RS 5 Coupe is powered by a 2.9-litre petrol engine and is capable of accelerating from 0 to 100 km in just 3.9 seconds.The car comes with a top speed of 250 km/h. The company is banking on the new model to play a key role in its image building and enhance the positioning as a young and sporty brand, according to Audi India Head Rahil Ansari.

Bringing motosport to a road near you, this masterpiece of a machine; The Audi RS 5 Coupe. 👌😍 @AudiIN #NothingToProve pic.twitter.com/l9exKrnA1V

"We are not looking at volumes for the RS 5 Coupe. Audi is perceived as a young sporty brand and this model will be the main contributor to that image building," Ansari told PTI.

The all new Audi RS5 Coupe has the performance of a sport scar, while providing comfort of a sedan, thus appealing to enthusiasts who love driving, he added.

It bridges the gap for those customers who are practical and want to own a luxury car with the performance of a sports car, Ansari said. The model will be imported as a completely built unit (CBU) from Germany like other sports cars that Audi sells in India. "At present, volumes don't justify assembling them here in India," he said.

Meanwhile, Kohli will be in action on Friday (April 13) as RCB hosts Kings XI Punjab in Bengaluru. A few days back, RCB lost its opening match of the IPL 2018 to Kolkata Knight Riders by four wickets and now will be looking for their first win. (Inputs PTI)

(The above story first appeared on LatestLY on Apr 11, 2018 11:32 PM IST. For more news and updates on politics, world, sports, entertainment and lifestyle, log on to our website latestly.com).