Virat Kohli Rewards Himself With Chicken Burger, Fries and Chocolate Shake After 235 Against England

India skipper Virat Kohli treated himself to a chicken burger, one big plate of french fries and a chocolate shake after his epic knock of 235 against England in 2016 in Mumbai. 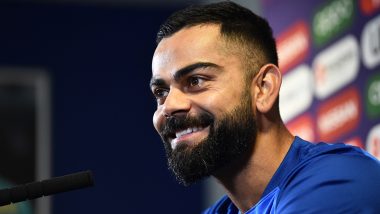 Kolkata, December 2: India skipper Virat Kohli treated himself to a chicken burger, one big plate of french fries and a chocolate shake after his epic knock of 235 against England in 2016 in Mumbai.

"When I finished on 235, I was gone, I was cooked, because during the game I don't like to eat heavy, so I was focusing on bananas and water and a little bit of dal-chawal and so on. So Basu sir (Shanker Basu) told me, 'tonight, you can afford to eat anything you like,' but even then I ordered -- and I was eating meat that time -- I ordered a chicken burger.

"I took off the top bun -- I couldn't stop myself -- I said, okay, one piece of bread is okay, not two, but then I had a big plate of fries and then I had a chocolate shake along with that, because I knew, my body needs it," Kohli said in an interview to India Today.

Kohli is vegan now and maintains a strict diet to keep himself fit and on top of his game. India recently whitewashed Bangladesh 2-0 in a Test series and are on top of the ICC Test Championship standings. The Men in Blue will now take on West Indies in three T20Is and three ODIs starting December 6.

(The above story first appeared on LatestLY on Dec 02, 2019 06:47 PM IST. For more news and updates on politics, world, sports, entertainment and lifestyle, log on to our website latestly.com).