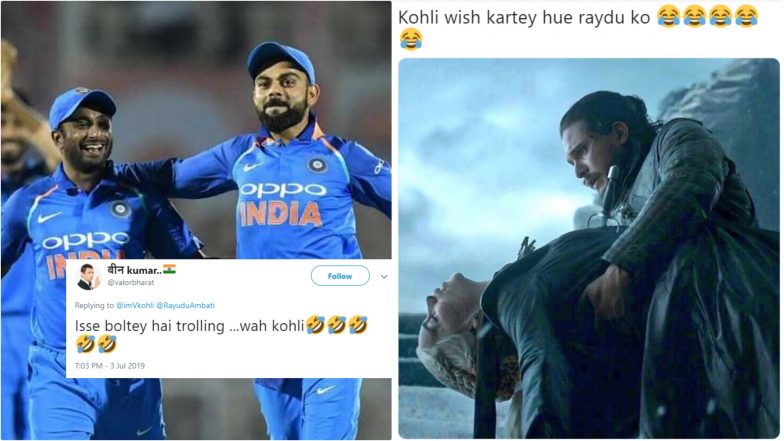 It is no news that World Cup snub forced Hyderabad batsman Ambati Rayudu to announce shock retirement from international cricket. The 33-year-old was unhappy on failing to find a place in Virat Kohli-led 15-man squad for ICC Cricket World Cup 2019. And later, as one of the replacements for injured players despite being named in the reserves. Rayudu’s untimely retirement got reactions from everyone including players, commentators and fans. But one man’s tweet is grabbing all attention. It is from none other than Indian Cricket Team captain, Virat Kohli. Ambati Rayudu Retirement: Here Are His 5 Best Knocks in International Cricket.

While former cricketers Virender Sehwag, Gautam Gambhir and VVS Laxman expressed their views on Rayudu’s retirement and wished the batsman well in life ahead, the same ‘good luck’ tweet by Virat Kohli is not going down well with cricket fans. Virat took to Twitter to wish ‘top man’ Ambati Rayudu. VK’s full tweet reads, “Wish you the best going forward Ambati. You're a top man 👊🙂👏 @RayuduAmbati”. Now, fans are not too pleased with this good luck message as they feel Kohli might have played a role in Rayudu’s retirement, and their belief is not entirely wrong. Mayank Agarwal Chosen Over Ambati Rayudu as Injured Vijay Shankar's Replacement Because of Virat Kohli and Ravi Shastri.

Wish you the best going forward Ambati. You're a top man 👊🙂👏@RayuduAmbati

And This is How Twitterati Reacted Over Kohli's Tweet

Is Kohli is Trolling Rayudu?

Do You Think This Is How Ambati Rayudu Would React?

And Some Angry Question

Then y did u select Mayank Agarwal over him??

Kohli Would Definitely Not Be Reading The Replies

While fans seem really angry with Virat Kohli, the now-retired right-handed batsman Ambati Rayudu is now. In fact, in his letter to the BCCI, Rayudu had good words to say for the talismanic Team India captain. He writes, "I would like to thank the captains I have played under, MS Dhoni, Rohit Sharma and especially Virat Kohli who always had shown great belief in me throughout my career with the Indian team." It looks like fans are being extra mean to Captain Kohli in this case.