Washington Sundar Misses Out on Maiden Test Century Again After Losing Partners From Other End, Netizens Feel Sorry for the Young All-rounder

Defying all the odds and challenges, Washington Sundar brought up his maiden Test century in the fourth Test against England at the Narendra Modi Cricket Stadium in Ahmedabad. It was indeed a test of character for Sundar as the Ahmedabad track was favouring the spinners while veteran pacer James Anderson was bowling with precision. 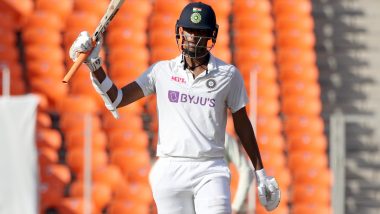 Defying all the odds and challenges, Washington Sundar put up a batting exhibition in the fourth Test against England at the Narendra Modi Cricket Stadium in Ahmedabad. However, he missed out on a well-deserved hundred as he ran out of partners from another end. He remained unbeaten on 96 as India posted 365 in their first innings, gaining a substantial 160-run lead. It was indeed a test of character for Sundar as the Ahmedabad track was favouring the spinners while veteran pacer James Anderson was bowling with precision. However, the southpaw paced his knock to perfection and scored 96 off 174 balls.  India vs England 4th Test 2021 Day 3 Live Score Updates.

Sundar came onto bat when India were reeling at 146/6 in the second innings, 59 runs behind England’s first-innings score. While many thought the home would bundle out for a low score, the southpaw had some different plans. He was watchful in the early part of his innings as Rishabh Pant, the batsmen from the other end, got the license to unleash his carnage. The two southpaws added 113 runs for the seventh wicket to guide India to safety. Rishabh Pant’s Stunning Reverse-Scoop off James Anderson During IND vs ENG 4th Test Sets Twitter on Fire.

While Pant perished after scoring a blazing century, Sundar wasn't ready to put his guards down. The 21-year-old got another potent partner in Axar Patel, who was also positive in his approach. Although, the youngster couldn't get to his century, India's lead went past 150. Notably, this is not the first time the youngster missed out on a ton as he ran out of partners. During the first match of the series in Chennai, he walked back into the dressing room unbeaten at 85. Netizens were indeed saddened seeing Sundar falling short of the landmark yet again. Have a look!

You gotta feel for Sundar 😢😭

Remained stranded on 85 in Chennai, and today he stays unbeaten on 96 as Stokes knocks Siraj over 😢

I Sharma and Siraj fall quickly. Sundar misses out on his century! He walks off 96*. Feel devastated for him! But it’s his highest Test score. What a brilliant young talent he is! On ya Washi! A delight to watch. HUGE things coming for him. India leads by 160. 🇮🇳🏴󠁧󠁢󠁥󠁮󠁧󠁿#INDvENG

Feel for Washington Sundar, unbeaten on 96 from 174 balls including 10 fours and 1 six - missed out his maiden hundred by 4 runs as India has been all-out for 365 runs in first innings. Painful end to a great knock under pressure. pic.twitter.com/UyKeBAVRfM

Each innings turned the game 🔥

Washington Sundar missed out two hundreds in the series as both times he run-out of partners at the other end.

The home team still has three wickets in hand, and it would be interesting to see how far their lead will be extended. England batsmen would indeed have a daunting task at hands in the third innings. However, they first need to bundle the hosts out.

(The above story first appeared on LatestLY on Mar 06, 2021 11:27 AM IST. For more news and updates on politics, world, sports, entertainment and lifestyle, log on to our website latestly.com).