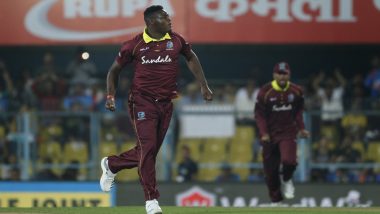 Jamaica, June 27: Former West Indies speedster Franklyn Rose expressed concerns over the fitness of current fast-bowler Oshane Thomas and stated he looks overweight going into the much-anticipated series against England. Thomas is part of the West Indies team that has travelled to England for their three-Test series starting July 8. The series will also mark the resumption of cricket after the sport was suspended in March due to coronavirus pandemic.

"I am a bit concerned because he looks overweight to me," Rose was quoted as saying by Jamaica Gleaner. "I never met the guy, but I know he has a lot of talent, and that's why the Windies has taken him to England on tour. But he needs to keep working hard and be hungrier for success." Thomas is yet to make his debut in the longest format but has featured in 20 ODIs and 12 T20Is for the Windies since breaking on to the international scene in 2018. Oshane Thomas, West Indies Pacer, Escapes Serious Injury in Car Accident in Jamaica.

Rose was also critical of Thomas' pace and stated he needs to work on his fitness to continue bowling in excess of 90mph. "If I come on the scene bowling 90 miles per hour, I would want to maintain that for another five years," Rose said.

"The question is, can he maintain that speed at the highest level if he is not at peak fitness?" Rose's comments came after Thomas had spoken about his fitness after he was picked for the England tour.

"I have been doing training and I have been doing some bowling here and there at Melbourne Oval on the concrete, in order to stay in shape during this pandemic," Thomas had told Jamaica Gleaner earlier this month.

(The above story first appeared on LatestLY on Jun 27, 2020 10:34 PM IST. For more news and updates on politics, world, sports, entertainment and lifestyle, log on to our website latestly.com).