The first match was washed out and both teams would once again aim at the beginning on a high in the series. West Indies, prior to this series, had defeated Australia 4-1 while Pakistan had lost 2-1 to England in T20Is. 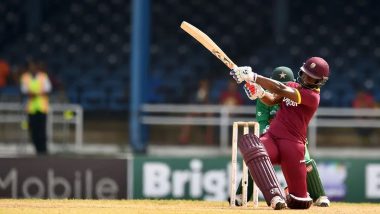 Action during the West Indies vs Pakistan (Photo credit: Twitter)

West Indies would be hosting Pakistan in the second T20I of the four-match series on Saturday, July 31. The match is scheduled to be played at the  Guyana National Stadium in Guyana and would start at 08:30 PM IST (Indian Standard Time). Only nine overs of play was possible in the first T20I as the first match was washed out. The venue was changed from Barbados to Guyana and the third and fourth T20I would also be played in the same venue. West Indies struggled to 85/5 at the end of nine overs with skipper Kieron Pollard, unbeaten on 22 off nine deliveries. West Indies would hope that their batsmen step up and bat more responsibly in the second match. West Indies vs Pakistan: Batsman Azam Khan Ruled Out From Second and Third T20I After Head Injury

Pakistan on the other hand would be without Azam Khan, who sustained a head injury during a training session and was subsequently ruled out of the second and third matches. Meanwhile, here are the details for the live streaming of the match.

The 2nd T20I of the three-match series between West Indies and Pakistan will be played at the Guyana National Stadium in Guyana on July 31, 2021 (Wednesday).  The match has a scheduled start time of 08:30 pm IST (Indian Standard Time) and 10:00 am local time.

There are no official broadcasters in India for the West Indies vs Pakistan T20I series hence fans won’t be able to catch the live-action of the 2nd T20I match on TV. Meanwhile, fans in Pakistan can catch the action PAK vs WI, 2nd T20I 2021 on their TV sets as Ten Sports and PTV Sports will telecast the game live.

Fans in India can watch the West Indies vs Pakistan T20I series on online platforms as FanCode will provide live streaming of PAK vs WI, 2nd T20I 2021 on its app and website for a nominal fee. Meanwhile, Pakistan fans can catch the live action on the official streaming platform of Ten Sports and  PTV Sports.

(The above story first appeared on LatestLY on Jul 31, 2021 07:41 PM IST. For more news and updates on politics, world, sports, entertainment and lifestyle, log on to our website latestly.com).