Both sides have won one match each in this five-match series. While West Indies won the first match convincingly, South Africa bounced back to level the series in the second game. 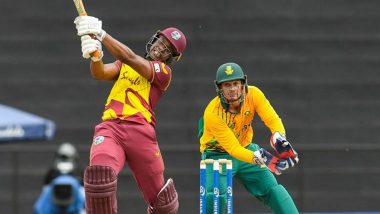 West Indies and South Africa would take on each other in the third T20I in the five-match series, on Tuesday, June 29. The match is scheduled to be played at the National Cricket Stadium, in Grenada. West Indies had begun the T20 series on a high, beating South Africa comprehensively by eight wickets. But the Proteas bounced back with a win in the second match, levelling the series in style with a 16-run win. Temba Bavuma has been exceptional whist dawning the captain's hat in the second T20I. The Venue for ICC Men’s T20 World Cup 2021 Has Been Shifted to the UAE and Oman, Scheduled to Begin from October 17

On the other hand, West Indies have been heavily boosted by the return of T20 superstars like Chris Gayle, Andre Russell and Evin Lewis and after a disappointing performance in the Tests, they would aim at doing well in the T20Is and secure a 2-1 lead.

West Indies vs South Africa 3rd T20I match will be played at National Cricket Stadium, St George's, Grenada. The game is scheduled to be held on June 29, 2021 (Tuesday) and will begin at 11:30 pm IST (Indian Standard Time).

Where To Watch Live Telecast of West Indies vs South Africa 3rd T20I, Match in India

(The above story first appeared on LatestLY on Jun 29, 2021 04:56 PM IST. For more news and updates on politics, world, sports, entertainment and lifestyle, log on to our website latestly.com).