Players were left divided in their opinions over the possible clashing of both WIPL and WBBL. While Indian cricketers like Mithali Raj and Jhulan Goswami thanked BCCI for announcing the women's T20 challenge, several Australia and New Zealand cricketers were left disappointed with the decision to host the tournament simultaneously with WBBL. 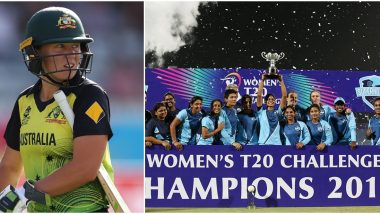 Australia wicketkeeper-batswoman Alyssa Healy was left disappointed with BCCI’s decision to host the women’s IPL or T20 Challenge around the same time when the women’s Big Bash League (WBBL) will be played in Australia. BCCI president Sourav Ganguly, on Sunday, announced that the women’s T20 Challenge will be played on the sidelines of the IPL in UAE. The 2020 edition of the men’s Premier League will be played in UAE from September 19 to November 8 with the Women’s IPL taking place towards the end of the IPL in November. Women’s IPL 2020: Australia Cricketer Alyssa Healy Takes a Dig at BCCI for Hosting WIPL During Women’s Big Bash League.

Around the same time the women’s Big Bash League, which is scheduled to be played from October 17 to November 29, will be played in Australia leaving many overseas cricketers with an option to either play in the WBBL or the WIPL. Women’s IPL 2020: BCCI President Sourav Ganguly Announce Women’s T20 Challenge to Be Played During Indian Premier League 13 in UAE.

Reacting to a tweet from Sports journalist and author, Boria Majumdar, Healy said “So during the WBBL.... cool” leading to a long heated argument with Majumdar over the clashing of both T20 women’s tournaments.

Healy also enquired if the Indian players, who have signed contracts with the WBBL franchises will honour their contract when both these tournaments (women's T20 Challenge and WBBL) run simultaneously leaving players to choose one tournament to participate and leave the other.

So the Indian players who’ve already signed wbbl contracts will do what? And all the international marquee players that will be in aus for wbbl? Good luck with it.....

Boria Majumdar replied saying that the Indian women's players themselves could answer the question on what will they choose and that the clashing of both tournaments could be avoided if both the Indian and Australian cricket boards decided to reason and come to an understanding. But Healy replied that since the WBBL is already scheduled and prepared to go ahead, perhaps the BCCI needs to understand.

Our tournament is set and prepared. There won’t be any understanding. Fairly sure players will abide by their contractual agreements in Aus. Especially considering it’ll be leading into finals.

Both individuals were then involved in a heated argument over how it will hamper the progress and development of women's sport if both these marquee T20 tournaments clash with each other.

And how sad that would be for our game considering how fantastic the wbbl is for the internationals who play in it (and for us). Would be a sad move for our sport.

The @IPL doesn’t need the marquee players. It’s already large. The women’s format however does. The wbbl and bbl don’t run simultaneously so why does the IPL and WIPL have to?

Things, however, turned a little sour when Healy called the decision to host the Women's T20 Challenge simultaneously with the WBBL a 'dumb' decision.

Let me say what I’ve been avoiding:

Yes because my rationale is coming from a current player in this environment who’s sad that we even have to be having this argument. More than happy to close this as I’m seeing overwhelming support for my argument! Cheers mate.

Meanwhile, players were left divided in their opinions over the possible clashing of both the WIPL and the WBBL. While the Indian cricketers like Mithali Raj and Jhulan Goswami thanked the BCCI for announcing the women's T20 challenge, several Australia and New Zealand cricketers were left disappointed with the decision, which leaves them with one tournament to play and skip the other.

(The above story first appeared on LatestLY on Aug 02, 2020 08:12 PM IST. For more news and updates on politics, world, sports, entertainment and lifestyle, log on to our website latestly.com).