For a few days now, Wriddhiman Saha’s injury has been in the news for all the wrong reasons. 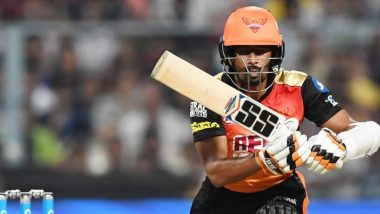 For a few days now, Wriddhiman Saha’s injury has been in the news for all the wrong reasons. As per several reports, Saha had suffered from a shoulder injury and it aggravated so much that it could cost his career. Owing to the injury, Saha was not a part of the test matches against England. A BCCI official on the condition of anonymity spoke to PTI and raised questions on Saha’s injury and said the people at the NCA did not even bother to inform Amitabh Chaudhary about the same. Now the BCCI has issued a statement about the Sunrisers Hyderabad wicket-keeper’s injury and said that he will undergo a surgery in Manchester next month.

The release read, "Wriddhiman Saha has sustained a posterosuperior labral tear. He will undergo surgery on his shoulder in Manchester at the end of July or the 1st week of August," the board said in a statement. "The labral repair surgery will be done by Dr. Lennard Funk in Manchester, UK. The entire course of treatment and consultation that was carried out at the NCA was performed in co-ordination with the India Team management and the GM of Operations," it added.

The BCCI also explained the action plan and the nature of the injury. The entire course of treatment and consultation that was carried out at the NCA (National Cricket Academy) was performed in co-ordination with the India Team management and the GM of Operations," BCCI said. Various experts are advising Saha on his injury. This includes Dr. Dinshaw Pardiwala, an orthopaedic surgeon at Mumbai's Kokilaben Ambani Hospital.

"Pardiwala opined that another steroid injection would assist Saha's recovery. He also stated that should the injury not respond to the injection, then surgery would be necessary. Post the injection, after observation and rehabilitation for five days, when his condition had not improved, he was declared unfit on the 13th of July and the India team management was informed of the same," the BCCI stated.

(The above story first appeared on LatestLY on Jul 21, 2018 03:52 PM IST. For more news and updates on politics, world, sports, entertainment and lifestyle, log on to our website latestly.com).