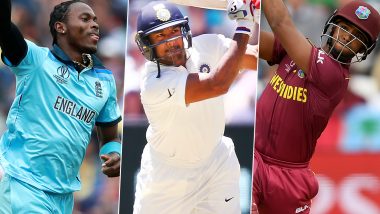 From the mind-boggling ICC Cricket World Cup to the roller-coaster Ashes series, the year 2019 witnessed some high-voltage action which proved to be an absolute treat for the fans. Some prominent players like Hashim Amla and Yuvraj Singh bided adieu to international cricket this year. However, the bright side is that the gentlemen’s game also produced some stars who are looking all set to take giant strides in international cricket. Debutants like Nicholas Pooran and Jofra Archer didn’t take long in becoming a formidable force in international cricket while the likes of Marnus Labuschagne and Shaheen Afridi emerged this year. Marnus Labuschagne Pips Steve Smith To Become Leading Test Run-Scorer in 2019.

Exploits were seen is all the formats of the game this year. Many young players grabbed their opportunities with both hands and announced themselves in style. It is believed that a cricketer generally gets better with time. So, leaving an impact early in the career is certainly not an easy job. Also, the pinch of international cricket is also different from domestic matches and handling the pressure at the highest level is also a challenging task. Focusing on the topic, let’s look at some cricket stars who emerged in 2019. Sunil Gavaskar Praises Mayank Agarwal, Says ‘Hope He Continues Batting Form in 2nd Year Also.'

It will not be wrong to say that the England Cricket Board left no stones unturned to include the Caribbean pacer in their squad and Archer justified his selection. The speedster was the third-highest wicket-taker in 2019 World cup and played a crucial role in guiding England to the title. Archer continued his good run in the longest format too as he took a five-fer in his Test debut. The pacer has already the side’s spearhead and will like to put up some good performances next year too.

Prithvi Shaw’s injury during India’s 2018-19 Tour of Australia proved to be a blessing in disguise as Test cricket got a new superstar in Mayank Agarwal. The opener made his debut in Melbourne and immediately made an impact by scoring 76 runs in his maiden outing. Well, that was just a start as he went to score two double hundreds later in the year and proved his mettle. India’s next Test assignment is against the kiwis and Mayank will again have the onus to top the batting charts.

The southpaw made a disappointing start to his ODI career as he bagged a duck on debut. However, Pooran redeemed himself in the 2019 World Cup by emerging as the highest run-scorer for West Indies. The aggressive left-handed batsman displayed immense maturity early in his career and many regard him to be the next big thing for Caribbean cricket. Pooran is expected to ride on the good start, he got in international and help Windies retain the World T20 title in 2020.

Who knew that Steve Smith’s injury during the second Ashes Test will prove to be a blessing in disguise for Australian cricket? Labuschagne became international cricket’s first-ever concussion substitute and has never looked back since then. The right-handed batsman piled runs consistently and is even the highest run-scorer in Test year. With the ICC World Test Championship going on, the youngster will want to put up many more significant knocks in order to guide the Aussies to the title.

Pakistan are known to be a factory of fast bowlers and Shaheen Afridi is another fantastic pacer coming from the nation. The left-arm bowler can bowl at a good pace and his ability to swing the ball makes him a serious threat to the batsmen. The youngster didn’t play all the matches in 2019 World Cup but was able to leave an impact in the games he featured. In total, he took 16 wickets in just five matches and was the side’s second-highest wicket-taker after Mohammed Amir.

‘Better late than never’ must have been the quote behind the right-handed batsman’s success in international cricket this year. Making his debut at 30, Van der Dussen might have started international cricket at an ideal age but was certainly able to make an ideal start. After the retirement of Ab de Villiers, the batsman got the opportunity to bat at number four in ODIs. Dussen might not have completely filled the boots of the former but did make a good impact. In 18 ODIs, he has scored 664 runs at a mind-boggling average of over 73 which are enough to speak volumes of his capability.

These stars have certainly proved their mettle at the highest level and will look to enhance their performance in the upcoming year. With the ICC Test Championship being underway and the 2020 T20 World Cup being less than a year away, these budding cricketers have the onus to put up a good show and guide their nation to the title.

(The above story first appeared on LatestLY on Dec 17, 2019 10:40 AM IST. For more news and updates on politics, world, sports, entertainment and lifestyle, log on to our website latestly.com).