The fourth Test between these two teams ended in a draw, and thus India emerged victorious in the series. It was a record win for India as the Kohli-led side became the first Asian team to win a Test series in Australia. 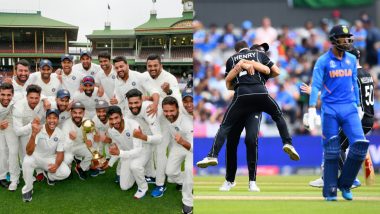 “The year 2019 has been one of the best years for Indian cricket. Apart from the 30 minutes in the World Cup, it’s been a great year.” Captain Virat Kohli’s these words perfectly sum up the year 2019 for the Indian cricket team. The 30 minutes, Kohli was talking about, were from the ICC Cricket World Cup 2019 semi-final against New Zealand. The Men in Blue were eliminated from the tournament after losing the semis against Kiwis. Nonetheless, the year 2019 saw Indian team reach upto the new level of supremacy. Indian Cricket Team Schedule & All Series in 2020: Complete Timetable With Date, Match Timings in IST & Tour Details Including ICC T20 World Cup and Asia Cup.

Tests: First Asian Side to Win a Test Series in Australia

It all started with a 2-1 series win over Australia in Australia. Though the three games of the four-match series were played in December 2018, but it was in January 2019 India won the series. The fourth Test between these two teams ended in a draw, and thus India emerged victorious in the series. It was a record win for India as the Kohli-led side became the first Asian team to win a Test series in Australia.

Following the tour of Australia, India won all their Test matches. The Kohli and Co. defeated West Indies in an away series by 2-0 and then registered consecutive whitewash wins against South Africa and Bangladesh. So, in 2019, India remained unbeaten in the game’s longest format and out of eight Tests, won seven with one Test against Australia in a draw. Year Ender 2019: From Ravi Ashwin's Mankading to MS Dhoni's Army Insignia Gloves, Controversies That Rocked Cricket This Year.

Apart from the ICC Cricket World Cup 2019, India played five bilateral ODI series in 2019. And won four of them. At the start of the year, India defeated Australia 2-1 and then thrashed New Zealand 4-1. Both wins came away from home! However, at home, India faced a 2-3 defeat on Australia’s reciprocal tour of India.

The action then shifted to the World Cup. And India started as one of the favourites. In the first round, India lost only to England and qualified for the semis after finishing on top of the points table. In semis, the Indians were pitted against New Zealand. While chasing a target of 240, India lost early wickets and were left reeling at 96 for six. Ravindra Jadeja and MS Dhoni fought back, but India lost the match by 18 runs.  Year Ender 2019 Cricket Special: Ben Stokes, Steve Smith Shine in Eventful Year.

After the World Cup, India played only two bilateral ODI series and both against West Indies (away and home). Unsurprisingly, the Men in Blue won both the series.

India played 16 T20Is in 2019 and managed to win nine while the Men in Blue lost seven. These 16 T20Is were played across six bilateral series. Out of the six series, India won three, lost two, and one against South Africa was drawn.

(The above story first appeared on LatestLY on Dec 31, 2019 04:05 PM IST. For more news and updates on politics, world, sports, entertainment and lifestyle, log on to our website latestly.com).