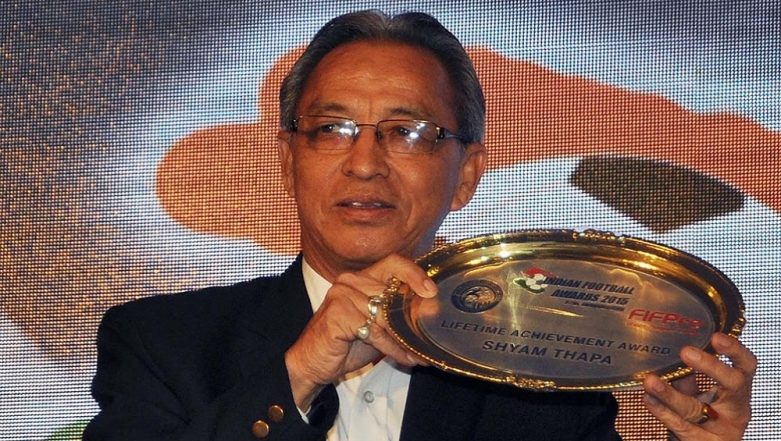 New Delhi, July 30: Legendary India footballer and Chairman of All India Football Federation's (AIFF) Technical Committee Shyam Thapa feels having residential academies across the country is the need of the hour if the level of the game has to be improved in this country. Speaking to IANS, Thapa said that the AIFF must look at running academies beyond the one they have wherein there are only 50-60 boys. He feels that at present there is no sense of competition among the boys.

"If out of all our states even 15 states agree (to have an academy) then see how many boys we will have and we can also conduct competitive tournaments for them. We can bring up the boys this way. In these academies, the only thing these boys will dream about is football. If this is done, after four years coaches will find it difficult to pick players and that too in every group," he said. Goal-Keeper Subrata Pal Calls for an Indian Football League Consisting Twenty Teams.

Thapa laments the lack of any national level planning in improving the fortunes of the game. A sensation during his playing days, Thapa recalled that India was at one point one of the top teams in Asia, but now countries from West Asia have become regional champions. "They have developed football in their countries, the respective government has taken interest. Their federations were seriously interested in developing football in their countries," he said adding that when everyone else is running we are simply walking.

He said there was no dearth of talent but a proper grooming system is missing to make boys play international standard football. "I suggested to them (AIFF) that if every state government run football academy selects 60 boys in every state, 20 each in the age group of 13-14, second group of 15-16 and a third group of 17-19 and develop them in the residential academy of that state, it will at the best come to around Rs5 crore a year. I don't think for the sports department of a state this amount is too big," he said.

"There are so many ex-footballers who have taken coaching degrees, A-License, B-License, C-license. They are waiting to take up assignments. The states can utilize those coaches also. And once good footballers come out of a state residential academy and represents the national team, the state also gets a name. Just see the example of Bhaichung Bhutia, because of him people all over world know Sikkim." He said the clubs are bringing retired foreign players because we don't have a crop of our own.

"I told the AIFF people during the U-17 World Cup that let's take Bhaichung, I.M. Vijayan, Sunil Chettri with us and go to the Sports Minister and convince him as he himself was a sports person and knew the value of an Olympic or Asiad medal," he said, adding that nothing moved despite AIFF appreciating the plan.