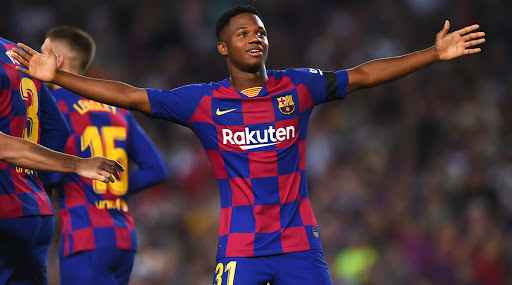 Barcelona prodigy Ansu Fati continues his dream season as the starlet became the youngest ever goal-scorer in the Champions League after he netted his first UCL goal. Fati came on as a substitute for Carles Perez in the 85th minute of the game and a minute later scored the winner for Barcelona which ultimately knocked Inter Milan out of this season’s Champions League. The 17-year-old wasn’t the only player to score his first UCL goal in the match as another La Masia graduate Carles Perez also netted his first goal in European competitions as he opened the scoring on the night. Inter Milan 1-2 Barcelona, UCL 2019-20 Result: Ansu Fati Makes History as Italians Crash Out of Champions League.

Aged 17 years, 40 days, the strike sees Fati break the record of Peter Ofori-Quaye, who was 17 years, 194 days old when he scored his first goal for Olympiacos in the Champions League during the 1997-98 season. The Guinea-Bissau born forward made his debut for the Catalan side earlier in the season against Real Betis. Fati’s goal in the dying minutes of the game was crucial as it ended Inter Milan’s chances of progressing to the round of 16 and knocked them out of the tournament. The youngster had already become the youngest scorer in Barcelona history when he scored against Osasuna in August breaking the record previously held by Bojan Krkic. Mohamed Salah Scores From Tight Angle Against RB Salzburg in UEFA Champions League 2019–20, Twitterati Hail Egyptians Strike (Watch Video).

Barcelona were already through to the knockout stages before the match even started but this result ended the Nerazzurri’s champions league campaign and they will be playing in the Europa League in the New Year. The Spanish champions will now have their eyes set on the round of 16 draw which will is to be held on December 16, 2019 (Monday) at the UEFA headquarters in Nyon.