Mikel Arteta's men have placed themselves in a good position to qualify for the Champions League and that can help them attract big players in the upcoming summer transfer window. Arsenal are in the lookout for strikers in the market after Pierre Emerick-Aubameyang left them to join Barcelona in the winter transfer window. 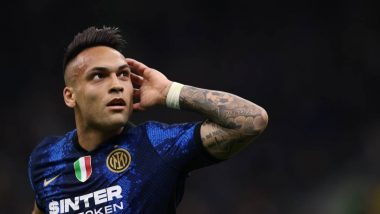 Arsenal are said to have renewed their interest in signing Lautaro Martinez from Inter Milan. It is no secret that the Gunners would be actively looking to sign a striker in the summer transfer window as they lack depth in that position and Martinez has reportedly emerged as one of the candidates Arsenal are looking at for the role. The Gunners had earlier pursued the Argentine as well but it was rumoured that the latter did not want the move since there would be no Champions League football at the Emirates. Cristiano Ronaldo Drops Hint on His Manchester United Future After Red Devils’ Win Over Brentford

But that is likely to change this season, especially with Mikel Arteta's men keeping themselves in a strong position to qualify for the premier European tournament next season. Arsenal are fourth on the Premier League table at the moment, with a two-point lead over Tottenham Hotspur. Arsenal would be left with no strikers if both Eddie Nketiah and Alexandre Lacazette leave the club next season. The Gunners have relied heavily on them, especially with Pierre Emerick-Aubameyang leaving to join Barcelona. Both Lacazette and Nketiah's contracts expire at the end of this season.

Arsenal have also been reported to have opened talks with Manchester City's Gabriel Jesus to sign the Brazilian and give him regular playing time, something he has not received in Pep Guardiola's setup. It remains to be seen who the Gunners zero in on as their first-choice striker next season.

(The above story first appeared on LatestLY on May 03, 2022 05:57 PM IST. For more news and updates on politics, world, sports, entertainment and lifestyle, log on to our website latestly.com).