Arsenal have managed to stay unbeaten but having played two consecutive draws, they would be eager to return to winning ways against Aston Villa, who are on a losing streak. Aston Villa have however won their last three matches against Mikel Arteta's men. 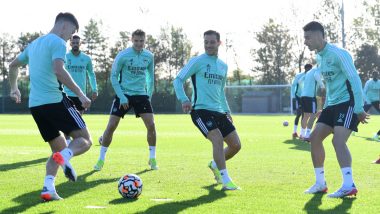 Arsenal would take on Aston Villa in a Premier League 2021-22 clash at the Emirates Stadium on Saturday, October 23. The match is scheduled to begin at 12:30 am IST (Indian Standard Time). Following a poor start to the season, Arsenal have revived their fortunes and have managed to stay unbeaten for five matches now but Mikel Arteta's men have not produced favourable results in their last two fixtures. A goalless draw against Brighton followed by a 2-2 thriller against Crystal Palace has seen the Gunners remain outside the top 10 on the points table. And Arteta would be keen on securing three full points against Aston Villa, although it would not be an easy task at all. Aston Villa on the other hand, have one point less than Arsenal and are below them and since beating Manchester United on September 25, they have failed to secure a win and have suffered two consecutive losses. Arsenal vs Crystal Palace Ends With 2-2 Draw, Gunners Remain Out of Top 10 From EPL 2021-22 Points Table

Arsenal captain Pierre Emerick-Aubameyang would be up against former teammate goalkeeper Emiliano Martinez as the Argentinian stopper would aim to draw inspiration from his performances for the national side ahead of the Arsenal clash. A win for either side would take them inside the top 10 of the table and both sides would be fighting hard to walk out with three points at  the Emirates Stadium.

Arsenal vs Aston Villa in Premier League 2021-22 will be played at the Emirates Stadium in London. The game will be held on October 23, 2021 (Saturday) and the match is scheduled to begin at 12:30 am IST (Indian Standard Time).

Where to Get Live Telecast of Arsenal vs Aston Villa, Premier League 2021-22 Football Match?

How to Get Free Live Streaming of Arsenal vs Aston Villa, Premier League 2021-22 Football Match?

The game will also be available online for live streaming. As Star Network is the official broadcaster for Premier League in India, fans can watch the live streaming of the Arsenal vs Aston Villa  match on Disney+Hotstar.

(The above story first appeared on LatestLY on Oct 22, 2021 09:46 PM IST. For more news and updates on politics, world, sports, entertainment and lifestyle, log on to our website latestly.com).