Mikel Arteta's men, who have been in good form in the past few matches, would take on a side led by Arsenal legend Patrick Vieira and it would be an interesting clash between these two London sides at the Emirates Stadium. 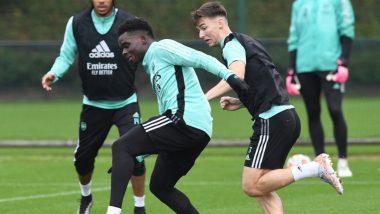 Arsenal would be raring to get one more win under their belt when they face Crystal Palace at the Emirates Stadium on Tuesday, October 19. The match would begin at 12:30 am IST (Indian Standard Time). What would underline this clash is Patrick Vieira's return to Arsenal, but this time as opposition manager. The French midfielder is a stellar figure in Arsenal football history and played a crucial role in the Gunners winning three Premier League titles under the tutelage of Arsene Wenger. As a matter of fact, the last time Arsenal won a title was in 2005, when Vieira was in the squad. The Gunners, currently Mikel Arteta, had a terrible start to the campaign with three consecutive losses in as many games and conceded nine goals in that period. But that is a thing of the past now as Arsenal won their next three games and drew another as they have started rebuilding their campaign. Manchester United Transfer News: Ole Gunnar Solskjaer Set To Continue Despite Recent Slump

Following a similar path has been Crystal Palace, who too did have a tough start to the season but Vieira has managed to instill life back in their campaign and give the Eagles fans hope of a good finish this season. They drew their last two matches and the South London side would aim for three points on their trip to the Emirates. Arsenal are expected to win this match.

Arsenal vs Crystal Palace in Premier League 2021-22 will be played at the Emirates Stadium in London. The game will be held on October 19, 2021 (Tuesday) and the match is scheduled to begin at 12:30 am IST (Indian Standard Time).Cristiano Ronaldo Forced By Ole Gunnar Solskjaer to Clap For Travelling Manchester United Fans After 4-2 Loss Against Leicester City in EPL 2021-22: Reports

Where to Get Live Telecast of Arsenal vs Crystal Palace, Premier League 2021-22 Football Match?

How to Get Free Live Streaming of Arsenal vs Crystal Palace, Premier League 2021-22 Football Match?

The game will also be available online for live streaming. As Star Network is the official broadcaster for Premier League in India, fans can watch the live streaming of the Arsenal vs Crystal Palace match on Disney+Hotstar. It is a challenge for Manchester United but one they would relish as they are playing away from home.

(The above story first appeared on LatestLY on Oct 18, 2021 08:50 PM IST. For more news and updates on politics, world, sports, entertainment and lifestyle, log on to our website latestly.com).