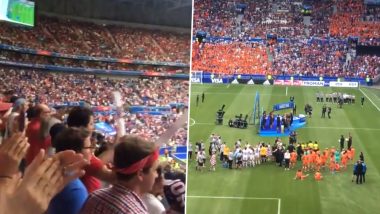 After US women's national football team won World Cup 2019 on Sunday, fans sitting in the audience chanted "equal pay". Videos and pictures of fans cheering for equal pay have gone viral on social media. The gender pay gap has been among issues garnering a lot of limelight in the recent past. The gender pay gap has been one of the issues that affected women's football in the recent years as players from all over the world have demanded pay parity from FIFA which is the international governing body of football. The United States beat Netherlands 2-0 in the tournament's final match at Stade de Lyon in France. Megan Rapinoe, US Captain at FIFA Women's World Cup 2019, Emerges as a Star: 5 Times the Footballer Proved to Be Maverick.

There is a vast difference in the prize money for men and women in FIFA. 2019 Women's World Cup has USD 30 million in prize money available, whereas the 2018 World Cup for men had USD 400 million available. In the video, fans can be seen cheering for equal pay as Infantino and French President Emmanuel Macron walk onto the field for the postgame ceremonies.

The #FIFA president just walked in along with President @EmmanuelMacron and #EqualPay is chanted in unison in the stadium. pic.twitter.com/9HW4058tNo

Here is another video:

US women's football captain Megan Rapinoe had also raised the issue of women's match is not brought in the forefront like that of men. Megan had earlier said that scheduling the Woman's Finals for Saturday and Men's Finals for Sunday is an insult. Megan was quoted as saying, "It's ridiculous, and disappointing, to be honest."

It is not just FIFA that does not pay men and women equally. Last week, more than 50 members of Congress had written to the US Soccer Federation demanding better pay. Female football players get a base salary of which is around USD 30,000 less than their male counterparts. The money they for reaching the World Cup is also less compared to their male counterparts.

(The above story first appeared on LatestLY on Jul 08, 2019 04:55 PM IST. For more news and updates on politics, world, sports, entertainment and lifestyle, log on to our website latestly.com).