Atletico Madrid coach Diego Simeone on Saturday said injured forward Diego Costa may not appear in the upcoming first leg of the Europa League semi-finals against Arsenal on Thursday at Emirates Stadium in London. 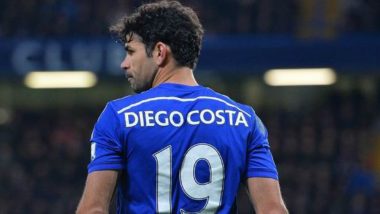 Madrid, April 21: Atletico Madrid coach Diego Simeone on Saturday said injured forward Diego Costa may not appear in the upcoming first leg of the Europa League semi-finals against Arsenal on Thursday at Emirates Stadium in London.

Simeone said he thinks Costa is likely to return in the second leg of Europa League semi-finals on May 3, but cautioned that he was still waiting for the doctors' reports on his forward's recovery, reports Efe.

Costa, 29, suffered a hamstring injury in the second leg of the Europa League quarterfinals against Sporting Lisbon on April 12.

Though he did not take part in group training on Saturday, Costa exercised on the sidelines as part of his recovery.

Costa has already missed two La Liga games against Levante and Real Sociedad, and is to be out for the third consecutive game against Real Betis on Sunday.

Simeone also stressed the need to keep his club's grasp on second place in the La Liga standings, adding that all his focus is on the next league match against Real Betis.

The Rojiblancos currently have 71 points, 12 points behind leaders Barcelona, but are just three points ahead of their cross-town rivals Real Madrid.

"We have to keep fighting to improve ourselves and try to maintain our position in La Liga," Simeone said at a press conference on the eve of the Betis clash.

"We're going to face a team that's playing very well. They've won six straight matches and they've been playing good football_ They're having one of their best seasons in La Liga," he added.

The Argentine coach was asked about the drop in Atletico's performance, having earned just 10 points out of a possible 21 in their recent matches, with three wins, one draw and three losses.

Simeone admitted that Atletico had missed out on important away points it would not have lost in the first half of the La Liga season, but still believed that his side kept their balance through the second half.

He stressed that the Rojiblancos are seeking to correct their results in the remaining games - whether in La Liga or the Europa League - and that his players are always doing their best to achieve victory, but admitted that the 0-3 loss to Real Sociedad last week was their worst game.

"We hope to play an intense and important match tomorrow in front of our fans. We'll have to seize control of the match," he added.

(The above story first appeared on LatestLY on Apr 21, 2018 10:19 PM IST. For more news and updates on politics, world, sports, entertainment and lifestyle, log on to our website latestly.com).