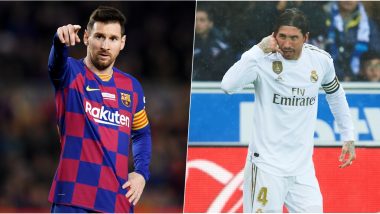 Football is set to return in Spain from the coronavirus suspension as La Liga recently announced the fixtures for the next two matchdays. Defending champions Barcelona, who have already won two consecutive La Liga’s, will begin their title defence against Mallorca at the Son Mix stadium on June 13, 2020. Meanwhile, archrivals Real Madrid will host SD Eibar at the Santiago Bernabeu as they look to win their first domestic league title since 2017. LA Liga Clubs to Start Full Training Sessions From June 1 As Government Gradually Ease COVID-19 Restrictions.

Barcelona have a two-point lead at the top of the table over Real Madrid and will look to maintain that as they travel to the Balearic Islands. The two teams met earlier in the season when Ernesto Valverde’s men emerged as 5-2 victors. Now with Quique Setien at the helm, the Catalan side will look to replicate a similar kind of result. Lionel Messi Accepts 'Risk' of Possible La Liga Return.

Real Madrid, on the other hand, are looking at the same scenario of the last few seasons as they are once again playing catch-up to Barcelona. Zinedine Zidane’s men will be hoping to make home advantage count against the side from the Basque region. Los Blancos have Eden Hazard back from injury and he will surely play a crucial part in the business end of the season.

⚽▶️ We will resume our @LaLigaEN campaign on Sunday 14 June against @SDEibarEN!

The remainder of the 2019-20 season will kick-off after a three-month pause with the Seville Derby between Real Betis and Sevilla at the Ramon Sanchez Pijuan stadium on June 11, 2019. Matches will be played on each of the following seven days with Barcelona hosting Leganes on June 16 and Real Madrid welcoming Valencia on June 18.

(The above story first appeared on LatestLY on Jun 01, 2020 12:40 PM IST. For more news and updates on politics, world, sports, entertainment and lifestyle, log on to our website latestly.com).