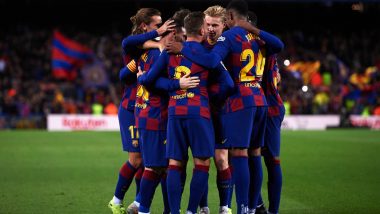 Barcelona vs Ibiza Live Streaming: Barcelona faces Ibiza in the Copa Del Rey round of 32 looking to shed their tag of chokers in a cup competition which they have inherited in recent past. New manager Quique Setien opened his account with a win against Granada. Although their performance was not up to the mark, there were changes in the passing pattern of the players. The Tiki-Taka brand of football is something Barcelona fans have admired in the past, and it will be sometime before Setien is able to revolutionise the squad. Segunda division club Ibiza know what a huge challenge they have on their hands and certainly need a miracle to progress. La Liga 2019-20 Result: Late Lionel Messi Goal Gives Barcelona 1-0 Win Over Granada In Quique Setien's First Match Incharge.

Luis Suarez and Ousmane Dembele are out for Barcelona with injuries and will not be in action for some time now. Lionel Messi could be rested by Quique Setien along with another star performer in Antoine Griezmann. The front three for Barcelona should be Carles Perez, Ansu Fati and Riqui Puig. Midfield will witness the return of youngster Frenkie De Jong who is under considerable pressure to resurrect his faltering Barcelona career. Gerard Pique could be included in the starting eleven to add calmness in the backline.

Ibiza comes into the match on the back of a 0-1 win over Rayo Majadahonda and goal scorer Rai Oliveira will be the key for the hosts once again against Barcelona. Winger Sergio Cirio will fancy himself taking on Barcelona in the wide areas with the kind of pace and trickery he possesses.

Ibiza hosts Barcelona on January 22 2020 (Wednesday), with kick-off time being 11:30 pm IST. Barcelona vs Ibiza Copa del Rey 2019-20 Round of 32 football match will be held at Estadio Municipal de Can Misses.

How to Watch Live Telecast of Barcelona vs Ibiza, Copa del Rey 2019-20 Football Match in India?

Where to Get Free Live Streaming Online of Barcelona vs Ibiza, Copa del Rey 2019-20 Football Match in India?

(The above story first appeared on LatestLY on Jan 22, 2020 02:47 PM IST. For more news and updates on politics, world, sports, entertainment and lifestyle, log on to our website latestly.com).