A total of 169 goals were scored in the tournament, but it was Pavard’s goal against Argentina that was selected as the ‘Best Goal of the 2018 FIFA World Cup 2018’. You Remember? Watch Video here. 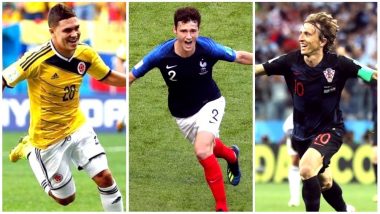 France outclassed Croatia at FIFA World Cup 2018 and became World Champions for the second time in football history. A total of 169 goals were scored in the football tournament, but it was Benjamin Pavard’s goal against Argentina, in their Round of 16 game, that was selected as the ‘Best Goal of the 2018 FIFA World Cup’.

The 22-year-old defender scored a sublime equaliser against Lionel Messi-led Argentina after they were 2-1 in the game. The equalising goal by Pavard saw French team gain such momentum that saw them score two more goals in the next 10 minutes. Three goals in 10 minutes saw Argentina team down to 4-2.

Benjamin Pavard’s goal set the foundation for the storm that swept away the Argentinians from the match, and from the tournament eventually. The right-footed half-volley hit by Pavard found the top corner of the goal in the 57th minute of the game saw the French fans at the Kazhan stadium go into a tizzy!

Watch Goal of the Tournament; Video of the Best Goal of the FIFA World Cup 2018; Benjamin Pavard (France):

The best goal of FIFA World Cup 2018 was selected through online voting by fans worldwide. Pavard’s best goal of the tournament saw fierce competition from Juan Quintero’s (of Colombia) goal against Japan in their Group H match, which the Colombian team eventually lost the game 1-2.

The third best goal of the tournament, voted by the fans, was Luka Modric’s long-range stunner against Argentina, again, in their Group D match, in which Croatia went past their opponents 3-0.

The Goal of the tournament came into being since the 2006 World Cup in Germany. The previous winners of the prestigious award are James Rodriguez (Colombia), Diego Forlan (Uruguay), and Maxi Rodriguez (Argentina), who won it during 2014, 2010, and 2006 editions respectively.

(The above story first appeared on LatestLY on Jul 26, 2018 09:14 AM IST. For more news and updates on politics, world, sports, entertainment and lifestyle, log on to our website latestly.com).