Cristiano Ronaldo and Bruno Fernandes were the stars of the international friendly match against Israel. Bruno Fernandes netted a brace and CR7 also chipped in with a goal. With this, Portugal won the match 4-0 at the Jose Alvalade Stadium. Bruno Fernandes was the one who scored the first goal of the game in the 42nd minute of the match. 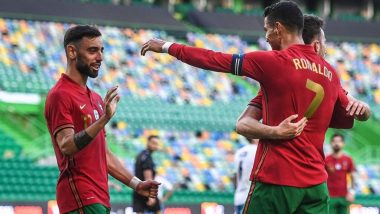 Now, let's have a look at the goal highlights of the game below:

Goal from Cristiano Ronaldo against Israel

This friendly game is quite an ideal preparation for the team as they will be soon playing in the Euro 2020.  Portugal will play the first game against Hungary on June 15, 2021.

(The above story first appeared on LatestLY on Jun 10, 2021 09:11 AM IST. For more news and updates on politics, world, sports, entertainment and lifestyle, log on to our website latestly.com).