Fabregas stated he understands why the decision was taken but also pointed towards other leagues trying to finish their respective seasons. "It was a big decision that was made and I can understand why they took it,' he told beIN SPORTS. 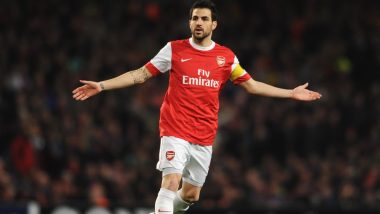 Monaco, May 11: Monaco midfielder Cesc Fabregas feels the decision to cancel football season in France was taken a bit too soon considering football associations around Europe are looking to restart their respective seasons. French authorities announced last month that all sporting activities will remain suspended in the country till September as a precautionary measure against the spread of coronavirus. This saw Ligue 1 ending abruptly and Paris-Saint Germain being crowned champions.

Fabregas stated he understands why the decision was taken but also pointed towards other leagues trying to finish their respective seasons. "It was a big decision that was made and I can understand why they took it,' he told beIN SPORTS. "But maybe it was taken a little too soon, considering a lot of the big leagues are still all trying to resume. Cesc Fabregas Recreates Eddie Murphy’s Classic Scene From Coming to America in This Funny Video During Coronavirus Self-Isolation.

"Although I completely understand the meaning behind it and it's better to be safe in all accounts, because the most important is the families and the health security of everyone and support this 100 per cent," he added. Players have returned for individual training in England, Spain and Germany and Fabregas said similar approach could have been taken in France.

Premier League, Bundesliga and LaLiga are currently moving ahead as per plans to finish the season which has been suspended since March. "But maybe we could've considered individual training, where you have basically no risk. You're not touching anyone, you're not close to anyone. See if everyone was getting closer to football behind played all over the world," Fabregas said.

"Obviously, it's very difficult and I understand someone needs to make decisions. We just have to do what they're telling us. "Difficult moment in our professional lives and personal lives, but we just have to hold on and everything will be fine in the future for sure," he added.

(The above story first appeared on LatestLY on May 11, 2020 02:44 PM IST. For more news and updates on politics, world, sports, entertainment and lifestyle, log on to our website latestly.com).