The Hammers had lost their last three matches, increasing the speculation that former Manchester City manager Pellegrini was set for the sack. Now Pellegrini goes into Wednesday's trip to Wolves with renewed hope of avoiding the axe after West Ham moved six points clear of the relegation zone. 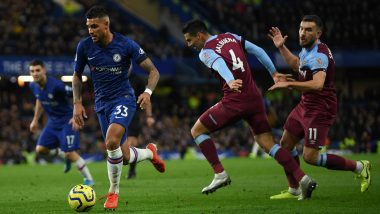 London, November 30: Aaron Cresswell eased the pressure on Manuel Pellegrini as the West Ham defender fired his struggling side to a shock 1-0 win at Chelsea on Saturday. Pellegrini was reportedly given two games to save his job this week, but the Hammers boss might have earned much-needed breathing space with a first win in eight Premier League games. It was West Ham's first victory at Stamford Bridge in 14 visits dating back to 2002.

The Hammers had lost their last three matches, increasing the speculation that former Manchester City manager Pellegrini was set for the sack. Now Pellegrini goes into Wednesday's trip to Wolves with renewed hope of avoiding the axe after West Ham moved six points clear of the relegation zone.

Inflicting a second successive Premier League defeat on Chelsea made the hard-fought result even sweeter for West Ham fans. After last weekend's loss at Manchester City, fourth placed Chelsea's momentum has stalled a little following one of the least coherent displays of Frank Lampard's maiden season in charge. West Ham's slump has coincided with the poor form of reserve keeper Roberto following an injury to first choice Lukasz Fabianski.

Pellegrini finally lost patience with Roberto after he conceded nine goals in his last three games, handing 33-year-old David Martin his debut after his pre-season move from Millwall. It proved a successful gamble and Martin cried tears of joy after keeping a clean-sheet on his first top-flight appearance.

When Martin was called into action for the first time, his save from Mason Mount's low drive drew extra loud cheers from the West Hams crammed into the Shed End behind him. Chelsea were dominating possession without finding the final touch needed to break down West Ham's massed defence as Christian Pulisic headed Pedro's cross wastefully over. Martin then misjudged Reece James' deflected cross and watched in panic as it clanged off the near post, with the resulting corner headed woefully wide by Kurt Zouma.

Despite Chelsea's territorial superiority, they remained creaky at the back.

No top-10 team had conceded more than the 19 goals Chelsea had allowed heading into the latest round of fixtures. Pellegrini's men almost took advantage of the holes in Chelsea's defence when Robert Snodgrass swung over a cross and Michail Antonio found space for a diving header that Kepa Arrizabalaga pushed away at full stretch.

Martin fumbled Mateo Kovacic's long-range effort before recovering quickly to block Olivier Giroud's attempt to knock in the rebound. With Tammy Abraham ruled out with a hip injury suffered in the midweek Champions League draw at Valencia, Giroud was making his first start since August 18.

But the France striker was totally anonymous for long periods and Chelsea lacked a cutting edge as a result. When James whipped over a teasing cross, Giroud arrived too late to make contact and Pulisic, just behind him, scuffed it wide to cap a frustrating half for Chelsea.

There was even more angst for Chelsea after the interval as a penalty appeal for handball against West Ham's Fabian Balbuena was turned down before the visitors snatched the lead in the 48th minute. Felipe Anderson and Pablo Fornals worked the ball wide to Cresswell on the edge of the Chelsea area and the left-back tricked James with a clever cut-back before curling a fine finish into the far corner.

Chelsea's defensive vulnerability had been laid bare and the Hammers nearly capitalised again when Balbuena's header from Snodgrass's corner was saved by Kepa. As Chelsea ran out of ideas, Antonio thought he had doubled West Ham's lead when he bundled in Snodgrass's cross, but VAR disallowed the goal for handball by the forward. It didn't matter as West Ham held firm in the closing stages to win for the first time since beating Manchester United on September 22.

(The above story first appeared on LatestLY on Dec 01, 2019 12:03 AM IST. For more news and updates on politics, world, sports, entertainment and lifestyle, log on to our website latestly.com).