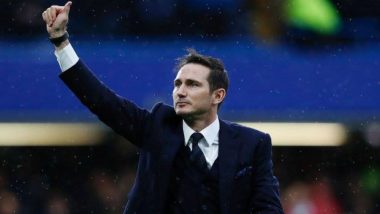 Lampard has so far led Chelsea into the FA Cup final and also helped them secure a place in next season's UCL. Solksjaer, on the other hand, guided United to third in the league and they still remain in contention for Europa League glory this term.

"Frank's done a better job, I have to say," Keane told Sky Sports. "I expect them to be there or thereabouts, but the way they've played, the way Frank comes across, he comes across really well.

"There's no nonsense about him, he's made big decisions, he's brought a lot of young players in, good players, good quality, but they've needed an opportunity, they took it.

"They finished in the top four and obviously if they can win an FA Cup... great achievement. Cristiano Ronaldo Misses Penalty During Juventus vs Sampdoria Serie A 2019–20 Clash, Fans Fear It Might Cost Him the Golden Boot (See Reactions).

"But as Frank is reminding everybody, he's not getting too carried away getting in the top four, but it's huge step forward for Chelsea again," the former Republic of Ireland captain added.

Chelsea were hit with a transfer ban prior to the season and they had to be content with playing talented youngsters from the academy who repaid Lampard's faith in them.

Also, Lampard has done a good job in landing top-class footballers for next term after their transfer ban was removed. They have already acquired the services of Hakim Ziyech (Ajax Amsterdam) and Timo Werner RB Leipzig) and are reportedly close to signing Kai Havertz (Bayer Leverkusen) as well.

(The above story first appeared on LatestLY on Jul 27, 2020 01:55 PM IST. For more news and updates on politics, world, sports, entertainment and lifestyle, log on to our website latestly.com).