The Blues have secured the third spot for themselves and would be aiming at finishing off the season on a high. Continue reading to get live streaming and telecast details of the match. 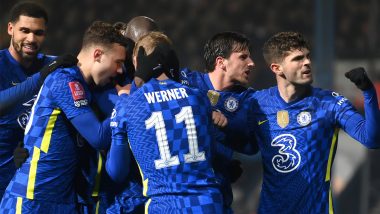 Chelsea are slated to face Watford in their final game of the Premier League 2021-22 season on Sunday, May 22. The match will be played at Stamford Bridge and is scheduled to get underway at 8:30 pm IST (Indian Standard Time). The Blues have already secured the third spot on the table for themselves and would be keen on ending the season with a victory. They have had a mixed campaign, winning crucial matches as well as suffering some disappointing defeats. Chelsea enter this clash on the back of 1-1 draw against Leicester City. Kylian Mbappe Signs New Contract at PSG, To Stay at Club Till 2025

Watford on the other hand, are already in the relegation zone and would drop down to the Championship after this game. Placed 19th on the points table, a win would help them consolidate that spot. Should Norwich defeat Tottenham, then Watford could end up at the last spot. Let us take a look at the live streaming and telecast details of the match.

The Chelsea vs Watford Premier League 2021-22 match will be played at the Stamford Bridge in Leeds. The game will be held on May 12, 2022 (Thursday) and is scheduled to begin at 12:00 am IST (Indian Standard Time).

Where to Get Live Telecast of Chelsea vs Watford, Premier League 2021-22 Football Match?

How to Get Free Live Streaming of Chelsea vs Watford, Premier League 2021-22 Football Match?

The game will also be available online for live streaming. As Star Network is the official broadcaster for Premier League in India, fans can watch the live streaming of the Chelsea vs Watford match on Disney+Hotstar.

(The above story first appeared on LatestLY on May 22, 2022 07:48 PM IST. For more news and updates on politics, world, sports, entertainment and lifestyle, log on to our website latestly.com).