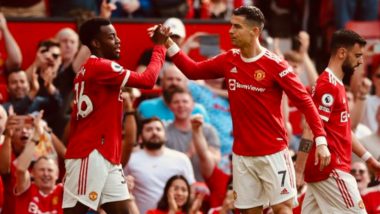 Cristiano Ronaldo was at his best as Manchester United defeated Norwich City 3-2 in the English Premier League 2021-22 clash. Ronaldo netted a hat-trick and helped his side collect three valuable points. Moreover, courtesy this hat-trick, the 37-year-old star footballer has earned a huge amount as well. The amount is part of the goal bonuses mentioned in his contract with the Manchester United. As per reports, 20-goal mark would fetch Ronaldo  £750,000 (roughly INR 7,47,66,744) and another £100,000 (roughly INR 99,68,899) as a bonus for every goal he nets after the 20-goal mark. Cristiano Ronaldo Hat-trick Video: Watch Manchester United Star Convert a Free-Kick into a Goal.

The hat-trick against Norwich City took Ronaldo’s tally to 21 goals this season. And that he means he has pocketed a bonus of £750,000 + £100,000, which is roughly worth over INR 8 crores. Reportedly, in Ronaldo’s contract there are few more bonuses, one of them being around £1m for finishing as the team’s top scorer this season. Ronaldo currently is the top scorer for Man Utd with 21 goals and there is a massive 12-goal difference between him and second-placed Bruno Fernandes. So, looks like Ronaldo is all set to pocket more bonus money. Manchester United 3-2 Norwich City, EPL 2021-22: Cristiano Ronaldo Hat-trick Hands The Red Devils Victory (Watch Goal Video Highlights).

Interestingly, the hat-trick against Norwich City was Ronaldo’s 60th (club + country). After the winning hat-trick, Ronaldo in an Instagram post expressed how his 60th hat-trick was an important one. “Very happy with this win and for getting us back on track in the Premier League. Like I said before, individual achievements are only worth it when they help us reach our goals as a team, and the 60th hat-trick in my career is so much more important because it brought us the 3 points. Well done, lads, tremendous effort from everyone. We’re not giving up, we’re fighting until the end!”

(The above story first appeared on LatestLY on Apr 17, 2022 10:45 AM IST. For more news and updates on politics, world, sports, entertainment and lifestyle, log on to our website latestly.com).