Cristiano Ronaldo Flaunts Well-Toned Body in This Shirtless Monochrome Pic Ahead of Juventus' Serie A 2020-21 Clash Against Sampdoria! 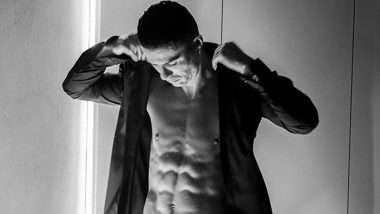 Cristiano Ronaldo is an icon for many both on and off the field. Along with being one of the greatest football players of all time, the Portuguese star is also a fitness icon for several around the world. The Juventus player is admired by many for the hard work he puts in the gym to keep himself in shape and even at the age of 35, Ronaldo is one of the fittest athletes in world football. Cristiano Ronaldo Starts Preparing for Serie A 2020-21 Match Against Sampdoria Along With Team Juventus (See Pics).

Cristiano Ronaldo recently showed off his well-toned body in an Instagram post before the new footballing season begins. The Portuguese star can be seen wearing an unbuttoned black shirt while posing for the picture. The 35-year-old recently returned to training with Juventus after being away on international duty with Portugal. Cristiano Ronaldo Enjoys Timeout With Girlfriend Georgina Rodriguez and Kids in the Pool (View Pic).

Cristiano Ronaldo’s future with Juventus was in doubt after the Italian side’s early exit from the Champions League at the hands of French side Lyon. Following that defeat, reports suggested that the Portuguese was considering his future away from Turin with Paris Saint-Germain tipped as his preferred destination.

However, the Portuguese star has decided to stay at the record Serie A champions and will once again begin the season with the hopes of bringing European glory to the club. Cristiano Ronaldo finished last season as Juventus top-scorer and broke several club record in the process and his presence will surely help the Biancoeri over the course of the season.

Juventus begin the Serie A 2020-21 campaign with a game against Sampdoria on Sunday (September 20). The Italian side have won the domestic league for nine consecutive years and will look to make it ten in a  row this time around with new manager and former player Andrea Pirlo at the helm.

(The above story first appeared on LatestLY on Sep 18, 2020 11:00 AM IST. For more news and updates on politics, world, sports, entertainment and lifestyle, log on to our website latestly.com).