Cristiano Ronaldo Knocked Out of UCL 2019–20: Here’s What Portuguese Star Needs to Do to Win Another European Title

Cristiano Ronaldo is 35 but his hunger for success is second to none in the game. He still scores plenty of goals and is in fine shape, the season gone by bears testimony to it. The Portuguese skipper failed to win yet another UCL title with Juventus after the Bianconeri’s exit against Lyon. Although the veteran scored a brace in the game, it proved to be futile in the end 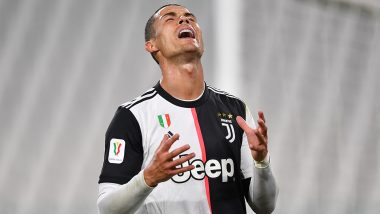 Portuguese skipper Cristiano Ronaldo failed to win yet another UCL title with new club Juventus after the Bianconeri’s exit against Lyon. Although the veteran forward scored a brace in the game, it proved to be futile in the end as the Italian side were knocked out on away goal rules. Juventus had signed Cristiano Ronaldo from Real Madrid hoping to cash in on his expertise in the Champions League, a competition he has won a staggering five times. But football is a team sport and one man can only carry a side to a certain point. Cristiano Ronaldo Bursts Into Tears After Lyon Knock Juventus Out of Champions League 2019-20.

Cristiano Ronaldo is 35 but his hunger for success is second to none in the game. He still scores plenty of goals and is in fine shape, the season gone by bears testimony to the fact. So what it will take for this legendary player to win yet another European crown, let us have a look. ‘Cristiano Ronaldo Will Stay With Us’ Says Juventus President Andrea Agnelli After Bianconeri Gets Knocked Out by Lyon in Champions League 2019–20.

He could consider moving away from Juventus, if they fail to build a squad that needs an overhaul. Cristiano Ronaldo is a player who believes in projects which often involve players with a strong desire to win and managed by an astute mind. He could move to a club like Paris Saint Germain, who would love an addition like Cristiano Ronaldo to guide a side full of superstars.

Juventus lacked world class names in their midfield department. They have struggled to replace star names like Paul Pogba and Andrea Pirlo and season after season, the board has neglected this department. Cristiano Ronaldo is a striker that relishes on total control by his midfielders. But the likes of Rodrigo Bentancur and Adrian Rabiot do not have the expertise for it and merely signing Arthur from Barcelona would not enough.

Maurizio Sarri and Cristiano Ronaldo have not clicked as a pair. The former Manchester United and Real Madrid man has made his displeasure felt on several occasions this term about how he has been handled by the Italian gaffer. It is clear Cristiano Ronaldo will like an attacking manger like Mauricio Pochettino at the helm of things with him preferred as the guy up top and not on the wings.

Juventus have quickly rubbished rumours of Cristiano Ronaldo’s exit post the Lyon game but they will need to be aggressive in the transfer market if they want to please their star forward. Champions League is something that is a priority for the Portuguese skipper and he will like his team to come back stronger next season in the competition.

(The above story first appeared on LatestLY on Aug 08, 2020 01:06 PM IST. For more news and updates on politics, world, sports, entertainment and lifestyle, log on to our website latestly.com).