The Derby County manager was not pleased with how Ronaldo's return for Manchester United has turned out to be and has shared his thoughts clearly. Ronaldo later responded to this criticism by calling Rooney, 'jealous'. 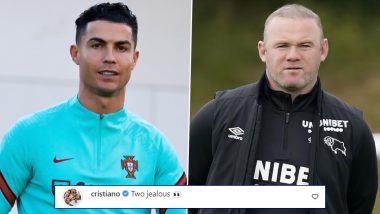 Cristiano Ronaldo responded to Wayne Rooney's comments on the latter's return for Manchester United this season. Ronaldo returned to Manchester United with high expectations of him leading the club to the domestic and European titles but things have not transpired that way, with the Red Devils' best possible result this season being a spot in the Premier League top four. Ronaldo has however continued his good form, currently leading the goalscoring tally for the club. Brazilian Football Confederation (CBF) in Talks With Pep Guardiola’s Agent: Reports

While talking on Sky Sports' Monday Night Football, Rooney shared his thoughts on how he felt Ronaldo's return to Manchester United, has been. Rooney felt that the move has not worked and that Manchester United needed, 'younger, hungry players.' Ronaldo did not take a liking to this statement by his former teammate at Manchester United. He shared a short comment on Rooney's Instagram post, expressing his displeasure.

See What He Wrote:

Ronaldo left a comment on Rooney's post, stating, "Two Jealous." Rooney, while responding to presenter David Jones, said, "You'd have to say no (it hasn't worked), at the minute. He's scored goals, important goals in the Champions League earlier on in the season, he scored the hat-trick against Tottenham."

The Derby County manager added, "But I think if you're looking at the future of the club, you have to go with younger, hungry players to lift Manchester United over the next two or three years. Obviously, Cristiano is getting on a bit and he's obviously not the player he was when he was in his 20s. That happens, that's football. He's a goal threat, the rest of the game, I think they need more younger and more hungry players."

(The above story first appeared on LatestLY on Apr 08, 2022 10:57 PM IST. For more news and updates on politics, world, sports, entertainment and lifestyle, log on to our website latestly.com).