The Portuguese's situation at Manchester United has been in focus in recent times with multiple reports claiming the player's eagerness to leave the club this summer. Manchester United are yet to make a signing this summer transfer window, something that has worried Ronaldo. 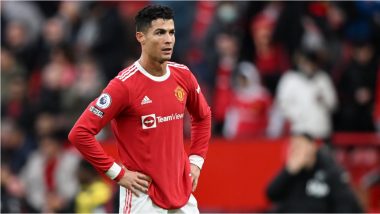 Ronaldo was said to be unhappy with Manchester United's lack of ambition so far in the transfer market with the Red Devils not having signed any player so far. The Portuguese agent Jorge Mendes had caught up with Chelsea's new owner Todd Boehly and Ronaldo's transfer to Stamford Bridge was said to have been among the topics of discussion. It has now been learnt that the higher-ups at Chelsea are seriously considering a move for the superstar, who could become the club's first signing of the summer window.

Manchester United, however, remain adamant that they are not interested in selling the player, who is contracted to the club till 2023. Bayern Munich have also reported being another potential destination for the 37-year-old. Should Ronaldo remain at Manchester United, he would miss out on playing the UEFA Champions League for the next season.

(The above story first appeared on LatestLY on Jul 04, 2022 08:46 PM IST. For more news and updates on politics, world, sports, entertainment and lifestyle, log on to our website latestly.com).