Monterrey posted a record of 39 wins, 13 draws and 20 losses during Alonso's May 2018-September 2019 tenure, which included an appearance in the Liga MX final and victory in the 2018-2019 Concacaf Champions League. 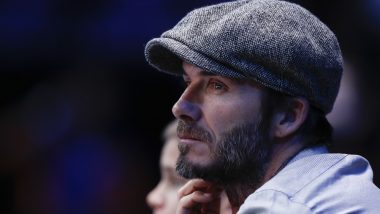 Miami, December 31: Diego Alonso, a former Uruguay international who has won trophies as a player and a manager, will be the head coach of Inter Miami when the Major League Soccer side takes to the pitch next year for its inaugural season, the David Beckham-led club has announced. The 44-year-old Alonso "brings a lot of experience and championship-winning mentality as we begin our drive to be among the best clubs in the Americas," Inter Miami CF Sporting Director Paul McDonough said in a statement.

Alonso comes to the MLS after a successful five years in Mexico, where he led two different clubs to titles. Monterrey posted a record of 39 wins, 13 draws and 20 losses during Alonso's May 2018-September 2019 tenure, which included an appearance in the Liga MX final and victory in the 2018-2019 Concacaf Champions League. Treble Anniversary Match: David Beckham Reunites With Sir Alex Ferguson and Manchester United Fans at Old Trafford; See Post.

Earlier, he guided Pachuca to the 2016 Liga MX crown and the 2016-17 Concacaf Champions League title. Alonso's squads defeated three MLS clubs -- two of them MLS Cup winners -- on the way to those Concacaf Champions League triumphs. In his playing days, Alonso scored 22 goals for Atletico Madrid in 2001-2002 to help the Colchoneros win Spain's second division and secure promotion to LaLiga.

The previous season, Alonso was part of the Valencia side that reached the UEFA Champions League final. Befitting someone who scored more than 110 goals in 320 matches, Alonso's approach as a manager emphasises the attacking game. Inter Miami will make their debut on March 1 with a match against the LA Galaxy, where Beckham won the MLS Cup in 2011 and 2012.

The naming of Alonso as Inter Miami coach followed a busy weekend for the club with two new player signings. Former Panama captain Roman Torres, 33, joined the expansion team as a free agent after spending five seasons with the Seattle Sounders, where he hoisted the MLS Cup on two occasions.

(The above story first appeared on LatestLY on Dec 31, 2019 09:54 AM IST. For more news and updates on politics, world, sports, entertainment and lifestyle, log on to our website latestly.com).