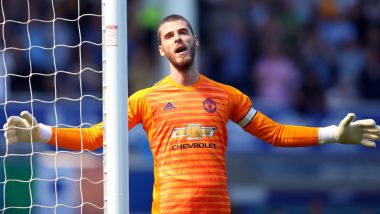 The official account of Manchester United a small clip were the Spain goal-keeper was seen keeping an eye on the movement of the ball and successfully defended all of them. Needless to say that the video would surely bring a smile on the faces of the fans of David de Gea. The fans posted their reaction as they saw David de Gea in action. First, check out the video and then a few reactions

Getting minutes in the tank 🔋

Speaking about the possible replacements of David de Gea it was said Sheffield United’s Dean Henderson is touted to be an ideal replacement for the Red Devils. Talking about the return of the impending season of the English Premier League 2019-20, the body aims to make a comeback sometime in June. For now, they have allowed contact practice for the players.

(The above story first appeared on LatestLY on May 28, 2020 02:41 PM IST. For more news and updates on politics, world, sports, entertainment and lifestyle, log on to our website latestly.com).