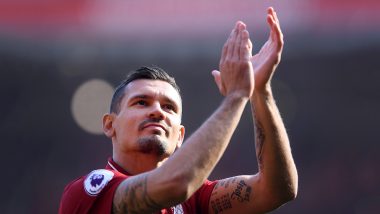 Dejan Lovren is set to end his six-year stay at Premier League team, Liverpool, as Russian side Zenit St Petersburg are about to sign the centre-back from next season onwards. The Croatian defender has fallen down the pecking order at the Merseyside club, with Joe Gomez and Joel Matip preferred by Jurgen Klopp over the 31-year-old. Lovren has been with the Refs since 2014 but will leave in the summer in search of regular football. Liverpool FC Lift EPL 2019-20 Trophy at Anfield Shining Bright With Fireworks!

According to a recent report from Goal, Zenit are closing in on a €12 million (£10.9m/$9.4m) deal to sign the Croatian. It is understood that the Russian club are in advanced talks to sign the 31-year-old defender in the summer and the deal is expected to be completed before Liverpool’s final game of the season away at Newcastle United. Liverpool Fans Gather Outside Anfield in Large Numbers to Celebrate EPL 2019–20 Title Lift.

Lovren has made just 15 appearances all season and lack of game time is the reason that the former Saints player is looking for a new club. The Croatians last start for Liverpool was against Watford in February at Vicarage Road, before the coronavirus suspension, where Jurgen Klopp’s team was beaten for the first time in Premier League this season.

The Croatian has been a great player for Liverpool and his six years at Merseyside has won the UEFA Champions League and Premier League honours. It is also understood that Italian side Roma were interested in acquiring the 31-year-old’s service while inquiries were made about him by two more Premier League teams.

Now it is yet to how Liverpool will replace the departing creation. Young academy players such as Ki-Jana Hoever, Billy Koumetio, and Sepp van den Berg could be given a chance if any of the three first-choice centre backs are injured. Nat Phillips, who is on loan at Stuttgart, is also one of the options for the Reds.

(The above story first appeared on LatestLY on Jul 24, 2020 06:45 PM IST. For more news and updates on politics, world, sports, entertainment and lifestyle, log on to our website latestly.com).