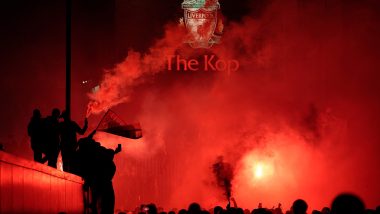 Liverpool, who won their first-ever Premier League title, following Manchester City’s defeat to Chelsea last month, finally got their hands on the coveted trophy last night after their game against the Blues. Captain Jordan Henderson lifted the EPL trophy at Anfield as the famous Kop stand was decorated with posters and banners of the players. But fans were not allowed inside the ground to be a part of the ceremony, however, Reds faithful gathered outside the stadium to rejoice the historic moment. Liverpool FC Lift EPL 2019-20 Trophy at Anfield Shining Bright With Fireworks!

Thousands of supporters crowded the streets outside Anfield stadium to celebrate their team lifting a first domestic league title in England’s top division for thirty years. Liverpool faithful enjoyed a moment they have waited three decades for by letting off flares, singing songs and paying tributes to their heroes. Liverpool Captain Jordan Henderson, Merseyside Police Request Fans Not to Come to Anfield for Premier League Trophy Celebrations.

Ahead of their games against Chelsea, the Merseyside club had urged fans to stay inside their homes and not gather in large numbers as social distancing protocols are still in place in the UK amid the coronavirus pandemic. This was done in order to not replicate the scenes which were created outside Anfield when Liverpool were first confirmed as EPL 2019-20 champions.

But all of this went out of the window when the final whistle blew at Anfield on Wednesday and fans started partying outside the stadium. Following the large gathering, Merseyside Police immediately placed a dispersal zone to tackle the situation. 'Please don't put yourselves and others at risk, the best view of the trophy presentation will be on the TV.’ Tweeted the police.

Jurgen Klopp, in a post-match interview, told fans to be ready for a party once the virus is over. ‘Five years ago I asked you to change from doubters to believers and you did it. You made it happen. Savour it and drink what you want. But you have to prepare for a party. When? I don't know. When this b******* virus is gone then we will have it,’ said the German manager.

(The above story first appeared on LatestLY on Jul 23, 2020 03:41 PM IST. For more news and updates on politics, world, sports, entertainment and lifestyle, log on to our website latestly.com).