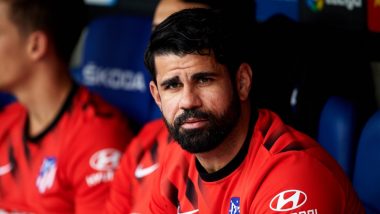 Atletico Madrid striker Diego Costa could face six months in prison if allegations against him for tax fraud in 2014 is proven. The 31-year-old is set to appear for trial in a Spain court on June 4 after a court filing showed that the forward was accused of tax fraud in 2014, which mentions that Costa defrauded the country of more than a million by not declaring payments of 5,150,622 euros from his move to Chelsea in 2014. Roger Federer Dethrones Lionel Messi, Cristiano Ronaldo, Tops Forbes 2020 List of World’s Highest-Paid Athletes.

Prosecutors, in Spain, have reportedly asked the court to hand Costa a punishment of six-month in jail and a fine of € 5000,000. Courts in Spain, however, state that sentences below two years for non-violent crimes can be exchanged for a bigger fine. Hence, if proved guilty, Costa would have to pay an additional fine of 36,500 euros. Costa signed for Chelsea in 2014 after the club agreed to pay the £32m buy-out clause in his contract at Atletico Madrid.

He arrived at Stamford Bridge in 2014 and scored 59 goals in 120 matches for The Blues, leading them to two Premier League titles and a League Cup trophy win before Atletico signed him back three years later. Conte was a major success at Stamford Bridge but a fallout with manager Antonio Conte in his final season at the West London club forced his sell to the La Liga side in 2017.

Since re-joining Atletico, Costa has helped the club to a Europa League and a Super Cup success in 2018 but his devastating goal-scoring form has disappeared since last season. The 31-year-old has scored just twice in 19 appearances this season and seems to have lost his scoring boots resulting in Atletico struggling in the sixth position with only 45 points from 27 games before the league was suspended due to the coronavirus pandemic outbreak.

(The above story first appeared on LatestLY on May 30, 2020 09:59 AM IST. For more news and updates on politics, world, sports, entertainment and lifestyle, log on to our website latestly.com).