Months after the death of legendary Argentine footballer Diego Maradona, a commission of experts has made serious allegations against his doctors and nurses. 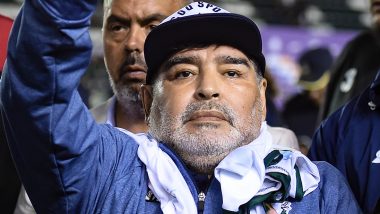 Buenos Aires, May 1: Months after the death of legendary Argentine footballer Diego Maradona, a commission of experts has made serious allegations against his doctors and nurses. The newspaper "La Nacion" cited a report by the medical commission on the last days of the star issued on Friday, "The conduct of Diego Armando Maradona's medical team was inadequate, deficient and inconsiderate. The patient was left to his fate."

Maradona died of a heart attack last year in November at the age of 60. He was recovering from surgery at the time. Though, it cannot be said with certainty that the star footballer would not have died with better medical care, at least he would have had a better chance of survival, said the report. Diego Maradona Dies of Heart Attack, Argentina Football Legend Passes Away Aged 60.

An investigation is being carried out into potential irregularities in the treatment of Maradona at his house in a guarded residential area north of Buenos Aires during the last two weeks of his life, reports DPA.

The state prosecutor's office is investigating at least seven members of his medical team for negligent homicide. The 1986 World Cup winner was recovering at his home after doctors had removed a blood clot in his brain.

According to the experts' report, the football star's care "was characterised by deficiencies and irregularities". "Maradona was not properly monitored and supported by the medical, nursing and therapeutic staff," said the report.

(The above story first appeared on LatestLY on May 01, 2021 11:25 AM IST. For more news and updates on politics, world, sports, entertainment and lifestyle, log on to our website latestly.com).