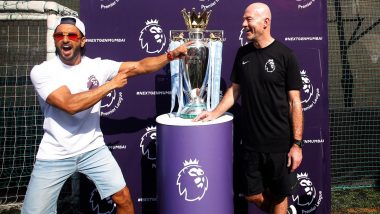 Bollywood superstar Ranveer Singh celebrates his 35th birthday today (July 6, 2020) and wishes are pouring in for the ‘Bajirao Mastani’ actor. Apart from the Indian film industry, the actor also received warm birthday greetings from the Indian Premier League account on his special day. The Bollywood actor is the brand ambassador of England’s top-flight footballing competition in India since December 2017. Ranveer Singh Birthday Special: 5 Understated Performances of the Simmba Star That Make Him So Awesome.

‘Birthday wishes to #PL ambassador @RanveerOfficial’ the Premier League India accounted posted on their official Twitter handle. The account shared several images of the Bollywood star which included his visit to Manchester United’s Old Trafford and Arsenal’s Emirates Stadium. Apart from this, the actor could be seen posing with the Premier League trophy alongside Alan Shearer, when he visited India for the league’s promotion. Ranveer Singh Birthday: 5 Reasons That Make This Handsome Hunk the Superstar of Bollywood!

Ranveer Singh has an old relation with the league as he is a huge fan of English side Arsenal. The actor during an interview with Indian football captain Sunil Chhetri revealed that he started supporting the club after their invincible 2003-04 campaign.

Speaking of the league, the competition restarted last month after the coronavirus enforced suspension and saw Liverpool being crowned champions for the first time in EPL history. Places for next year’s Champions League are yet to be decided as four teams are still fighting for the remaining two slots after Liverpool and Manchester City.

(The above story first appeared on LatestLY on Jul 06, 2020 03:08 PM IST. For more news and updates on politics, world, sports, entertainment and lifestyle, log on to our website latestly.com).