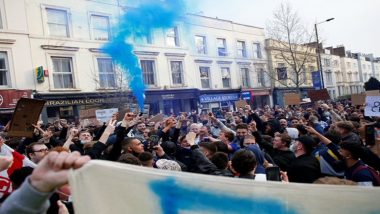 Many clubs including, Manchester United, Arsenal and others had withdrawn from the breakaway league and Atletico de Madrid has been the latest to pull their strings from the European Super League. Big six from Premier League, Juventus, Barcelona, Liverpool, Real Madrid and a few others were the founding members of the league. Liverpool players had issued a joint statement and said that they have not liked the idea of the league and they will not let it happen.

Now, let's have a look at the videos of the fans celebrating the withdrawal.

Chelsea’s 5000 fans celebrating after they heard their team is withdrawing from the Super league: pic.twitter.com/9p49vRw7le

Chelsea fans celebrating when they heard of the news that the club were pulling out of the Super League. ✊ [@footballdaily] #SuperLeague

On Tuesday even Manchester United and Barcelona fans had gathered outside their clubs and had huge banners condemning the move. One of them read football is not your toy to be played by you.

(The above story first appeared on LatestLY on Apr 21, 2021 04:27 PM IST. For more news and updates on politics, world, sports, entertainment and lifestyle, log on to our website latestly.com).