Furious Zlatan Ibrahimovic Kicks the Bottle in Frustration After Being Subbed During AC Milan vs Napoli, Serie A 2019-20 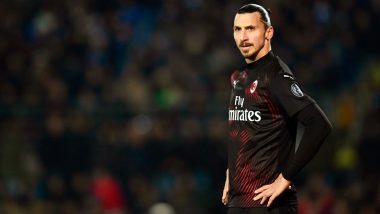 Zlatan Ibrahimovic wears his heart on his sleeve and is often seen expressing his emotions on the field. Recently he featured in AC Milan's tie against Napoli and he was seen venting out his frustration at the bottle after being subbed at the 61st minute with Rafael Leao. This surely did not go do well with the former Manchester United star and he kicked the bottle lying on the ground while making an exit to the dug-out. The match ended with a 2-2 draw and after the match, AC Milan manager Stefano Pioli was quizzed about his behaviour. Zlatan Ibrahimovic Launches Fresh Attack on Cristiano Ronaldo, Teases him With Lionel Messi Jibe.

The manager defended Zlatan's behaviour and said that he was angry with the overall situation and because he felt that he could do better. "He got angry because we could do better in some situations, we could play better and he can do more. At the end of the game, he was very happy. He wants to help us until the end as we all want to do," said Pioli after the game.  AC Milan had been unbeaten after the restart of Serie A 2019-20.

For a while now there have been doubts about Zlatan Ibrahimovic's future in AC Milan. He even had a spat with Ivan Gazidis ahead of their Coppa Italia 2019-20 semi-final against Juventus. The official from AC Milan had appeared ahead of the semi-finals and Zlatan questioned him for his absence for so long. The spat happened on the field when the team was still sweating it out in the stadium.

(The above story first appeared on LatestLY on Jul 15, 2020 11:39 PM IST. For more news and updates on politics, world, sports, entertainment and lifestyle, log on to our website latestly.com).