Bale had joined Spurs on loan from Real Madrid last summer in a bid to get more game time. With Ancelotti now in charge at the Bernabeu, Bale's future at looks secure at the moment, despite just a year remaining on his contract. 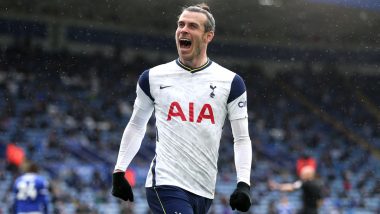 Gareth Bale will not be returning for a third spell at Tottehnam Hotspur for the 2012-22 season, confirmed new manager Nuno Espirito Santo on Saturday. The winger had joined his former side on loan last summer in a bid to increase his game time and did make 10 appearances in the Premier League, where he scored 11 goals. Santo, while speaking to the press, said, "Gareth Bale will not be part of our squad." This confirmation puts to rest all speculations which suggested that the Welshman might extend his stay at North London for another year. Instead, he would now return to his parent club Real Madrid, who appointed Carlo Ancelotti as new manager following the departure of the legendary Zinedine Zidane a while ago. Harry Kane Might Skip Tottenham Hotspur Training To Force a Move Away From the Club Ahead of 2021–22 Season: Reports

Bale did relatively well for Spurs last season, with his most notable performance coming in form of a hat-trick against Sheffield United. He was isolated by Zidane at Madrid and his loan spell at Tottenham last summer helped fans witness glimpses of his excellence on the pitch. With Zidane now gone, it is understood that the 32-year old has a future at Real Madrid, especially with Ancelotti reportedly including the winger in his plans next season.

Bale still has one year left in his time at Madrid and it remains to be seen how he is utilised by Ancelotti. He is currently on a holiday after playing for Wales in Euro 2020 and would join the Real Madrid training sessions soon.

(The above story first appeared on LatestLY on Jul 17, 2021 04:24 PM IST. For more news and updates on politics, world, sports, entertainment and lifestyle, log on to our website latestly.com).