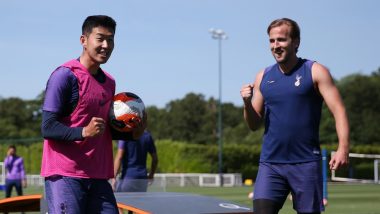 After a gap of almost a couple of months, the players of the English Premier League have returned to their bases and have started sweating it out. Now, this obviously includes the players from Tottenham Hotspurs. A few days ago, the official handle of the team shared a snap of Harry Kane who had been away from action since January due to an injury and then it was the lockdown due to the coronavirus that forced him to stay missing in action for yet another three months. Amid this, Kane looks a little overweight in the snaps shared by Tottenham. English Premier League Agrees to Have 5 Substitutes for Season Restart.

The netizens were quick enough to notice the change in him and immediately pointed out saying, “Harry Kane looks fat.” Tottenham shared Kane’s snap with South Korea’s Son Heung-min and no sooner the social media users saw the picture, comments started pouring in. Check out the pictures below and then the reactions from the fans below

Son went to the army.

And he was on military duty? Were they eating pastries as drills?

Jeez!! Looks like Kane’s been raiding the old fridge during lockdown.

Tottenham Hotspur will play their first game against Manchester United on June 19, 2020, and then West Ham on June 23, 2020. The team will play their third game Sheffield United FC on July 2, 2020.  Harry Kane had been injured due to a hamstring injury. However, now the Tottenham Hotspur's forward is raring to go and has even fired a warning to Manchester United and their other opponents.

(The above story first appeared on LatestLY on Jun 06, 2020 04:09 PM IST. For more news and updates on politics, world, sports, entertainment and lifestyle, log on to our website latestly.com).