Football star Megan Rapinoe has joined US President Joe Biden at the White House to promote equal pay for women and men. 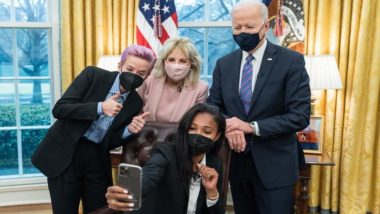 Rapinoe, 35, has been part of a long-running fight for the US Women's National Team (USWNT) to be paid as much as their male counterparts, DPA news reports.

She said at an event at the White House on Wednesday that despite her numerous career wins, including a Ballon d'Or Feminin, two World Cups and an Olympic Gold, "I've been devalued, I've been disrespected and dismissed because I'm a woman and I've been told I don't deserve any more than less because I am a woman".

"For each trophy, of which there are many, and for each win, for each tie and for each time that we play, it's less," Rapinoe added, stressing the need for policies supporting equal pay.

During the event, First Lady Jill Biden also revealed that when she first started teaching she was earning just 75 per cent of what a man hired at the same time earned.

"A job is so much more than a paycheck, but our paychecks reflect how we are valued by our employers and even by our communities," the First Lady said.

"Equal work deserves equal pay no matter who does it."

The President meanwhile stressed how the coronavirus pandemic exacerbated the gender gap.

"It undermines financial security for women and families. It hurts our entire economy.

"My administration is going to fight for equal pay ... It's about justice, it's about fairness, it's about living up to our values," he said.

The event took place on "Equal Pay Day", which marks how much longer women typically have to work to match what men make in a single year.

US women working full-time year-round are typically paid just 82 cents for every dollar paid to men.

Earlier in the day, Rapinoe testified in front of the House Committee on Oversight and Reform, which is examining "the economic harm caused by longstanding gender inequalities, particularly for women of colour".

"What we've learned and what we continue to learn is that there is no level of status, accomplishments, or power that will protect you from the clutches of inequity. One cannot simply outperform inequality or be excellent enough to escape discrimination of any kind," said Rapinoe.

"The US Women's National team has won four World Cup championships and four Olympic gold medals on behalf of this great country. We have filled stadiums, we've broken viewing records, sold out jerseys, all popular metrics by which we are judged. And yet despite all of this, we are still paid less than our male counterparts," she testified.

Players from the USWNT have sued the US Soccer Federation (USSF) for discrimination over unequal pay in an ongoing legal battle.

Biden threw his support behind the players during his presidential campaign, tweeting in May after a federal court judge in California dismissed their case.

"To @USWNT: don't give up this fight. This is not over yet. To @USSoccer: equal pay, now. Or else when I'm president, you can go elsewhere for World Cup funding."

Earlier in 2020, the US Soccer Federation's (USSF) then-president Carlos Cordeiro stepped down after a legal filing suggesting that the women's national team was inferior to the men's and not deserving of equal pay was made public and prompted an outcry.

In December 2020, the USWNT and USSF reached an agreement over equal work conditions with their male counterparts, though the equal pay discrepancy has not been settled yet.

The players have appealed the May decision and are seeking millions of dollars in backpay from the federation.

(The above story first appeared on LatestLY on Mar 25, 2021 02:54 PM IST. For more news and updates on politics, world, sports, entertainment and lifestyle, log on to our website latestly.com).